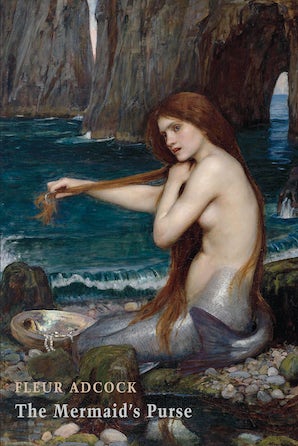 Fleur Adcock began writing the poems in this book when she was 82. The two chief settings are New Zealand, with its multi-coloured seas, and Britain, seen in various decades. There are foreign travels, flirtations, family memories, deaths and conversations with the dead. Katherine Mansfield, incognito, dodges an academic conference; there’s a lesson in water divining as well as a rather unusual Christmas party. We meet several varieties of small mammal, numerous birds, doomed or otherwise, and some sheep. The book ends with a sequence in memory of her friend, the poet Roy Fisher.

Born in New Zealand in 1934, Fleur Adcock spent the war years in England, returning with her family to New Zealand in 1947. She emigrated to Britain in 1963, working as a librarian in London until 1979. In 1977-78 she was writer-in-residence at Charlotte Mason College of Education, Ambleside. She was Northern Arts Literary Fellow in 1979-81, living in Newcastle, becoming a freelance writer after her return to London. She received an OBE in 1996, and the Queen’s Gold Medal for Poetry in 2006 for Poems 1960-2000 (Bloodaxe Books, 2000). Fleur Adcock published three pamphlets with Bloodaxe: Below Loughrigg (1979), Hotspur (1986) and Meeting the Comet (1988), as well as her translations of medieval Latin lyrics, The Virgin & the Nightingale (1983). She also published two translations of Romanian poets with Oxford University Press, Orient Express by Grete Tartler (1989) and Letters from Darkness by Daniela Crasnaru (1994). All her other collections were published by Oxford University Press until they shut down their poetry list in 1999, after which Bloodaxe published her collected poems Poems 1960-2000 (2000), followed by Dragon Talk (2010), Glass Wings (2013), The Land Ballot (2015) and Hoard (2017). The Mermaid's Purse is due from Bloodaxe in 2021. Poems 1960-2000 and Hoard are Poetry Book Society Special Commendations while Glass Wings is a Poetry Book Society Recommendation. In October 2019 Fleur Adcock was presented with the New Zealand Prime Minister’s Award for Literary Achievement in Poetry 2019 by the Rt Hon Jacinda Ardern.