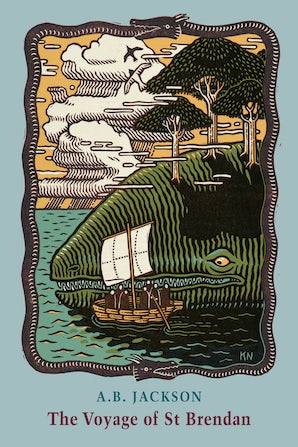 The Voyage of St Brendan

In The Voyage of St Brendan, A.B. Jackson tells the tale of the legendary seafaring Irish abbot in poetry and prose. After burning a book of fantastical stories, Brendan is compelled to sail the ocean with a crew of six monks in a leather-skinned currach; his task, to prove the existence of wonders in the world and create a new book of marvels. Discoveries include Jasconius the island-whale, a troop of Arctic ghosts, a hellmouth of tortured souls, a rock-bound Judas, and the magical castle of the boar-headed Walserands. Although the roots of this legend lie in early Irish tales and the Latin Voyage of Brendan the Abbot of the ninth century, Jackson has taken the 14th-century Middle Dutch version of Brendan’s voyage as the template for this engaging, witty and spirited interpretation, notable for its humour and inventiveness. The book is beautifully illustrated with a series of black and white linocuts by the American artist Kathleen Neeley, one of which features in color on the cover.

A.B. Jackson was born in Glasgow in 1965 and raised in the village of Bramhall, Cheshire. After moving to Cupar in Fife he studied English Literature at the University of Edinburgh. His first book, Fire Stations (Anvil), won the Forward Prize for Best First Collection in 2003, and a limited edition pamphlet, Apocrypha (Donut Press), was published in 2011. In 2010 he won first prize in the Edwin Morgan International Poetry Competition. His second collection, The Wilderness Party (Bloodaxe Books, 2015), was a Poetry Book Society Recommendation. The Voyage of St Brendan is published by Bloodaxe Books in 2021.