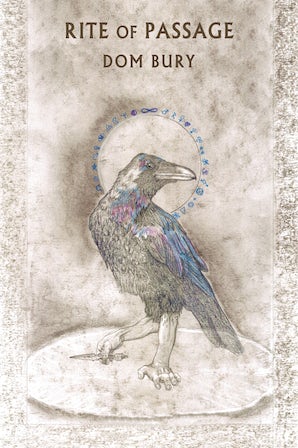 Dom Bury’s Rite of Passage is an initiation into what it means to be alive on the planet in the midst of extinction, of climate, environmental and systematic collapse. It is a journey into the shadow of man’s distorted relationship with the earth. And yet in the utter darkness of this hour, these often provocative poems suggest that there is hope. That we have had to come to the edge of our own annihilation as a species to collectively shift how we live, that only in the dark glare of this crisis, can a new world from the ashes of the old one now be formed. Dom Bury is a writer and activist who runs workshops on the emotional and human impacts of climate change and environmental degradation. He received an Eric Gregory Award in 2016 and won the 2017 National Poetry Competition with his poem ‘The Opened Field’. Rite of Passage is his first collection.

Dom Bury is a writer and environmental activist whose first collection Rite of Passage was published by Bloodaxe in 2021. He was given an Eric Gregory Award in 2016, and won the 2017 National Poetry Competition with his poem 'The Opened Field', which was made into a film by the Poetry Society. The recipient of a Jerwood/Arvon Mentorship, he also won the Magma Poetry Prize and 2nd Prize in the Resurgence Ecopoetry Competition and was a finalist in the Ballymaloe International Poetry Competition. He has performed his work on BBC Radio 4, at Aldeburgh, Ledbury and other poetry festivals. He holds workshops, rituals and initiations on the emotional and human impact of climate change and environmental degradation, describing himself as 'a devotee to this green miraculous earth in this time of planetary transfiguration' whose work addresses how 'to live in a world in crisis and how we can move back into equilibrium and greater connection with the earth'. He lives in Devon.