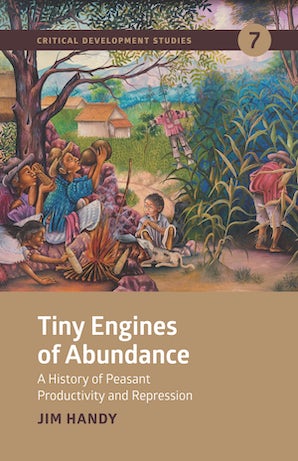 A History of Peasant Productivity and Repression

This book provides a historical and comparative perspective of peasant productivity using case studies portraying the extraordinary efficiency with which English cottagers, Jamaican ex-slaves, Guatemalan Mayan campesinos, Nigerian hill farmers and Kerala hut dwellers obtained bountiful and diversified harvests from small parcels of land, provisioning for their families and often local markets. These stories provide us with pictures of carefully limited needs, of sustainable livelihoods and of resilient self-reliance attacked relentlessly and mercilessly in the name of capital, progress, development, modernity and/or the state. For two hundred years we have been told that the hundreds of thousands, or millions, or billions of hungry mouths require that peasants be dispossessed to allow more industrious farmers to feed them. This book helps make it clear how wrong we have been. Handy’s approach is original, and the book will engage people interested in the history of the peasantry, rural development, and the quest for food sovereignty.

Jim Handy is a professor of history at the University of Saskatchewan. He has written extensively on Guatemalan history and more generally on peasant economies, agrarian reform and political economy. He has been president of the Canadian Association for Latin American and Caribbean Studies, which awarded him a Distinguished Fellow recognition in 2015, particularly for his contribution to graduate student training. He has received numerous teaching awards and the J.W. George Ivany Internationalization Award by the University of Saskatchewan.