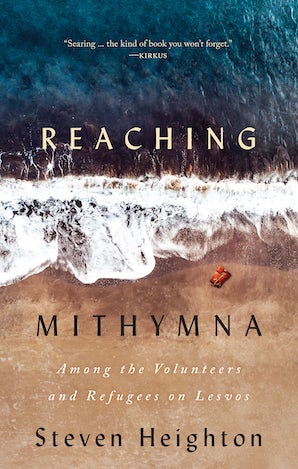 Among the Volunteers and Refugees on Lesvos

In the fall of 2015, Steven Heighton made an overnight decision to travel to the frontlines of the Syrian refugee crisis in Greece and enlist as a volunteer. He arrived on the isle of Lesvos with a duffel bag and a dubious grasp of Greek, his mother's native tongue, and worked on the landing beaches and in OXY-—a jerrybuilt, ad hoc transit camp providing simple meals, dry clothes, and a brief rest to refugees after their crossing from Turkey. In a town deserted by the tourists that had been its lifeblood, Heighton-—alongside the exhausted locals and under-equipped international aid workers—-found himself thrown into emergency roles for which he was woefully unqualified.

From the brief reprieves of volunteer-refugee soccer matches to the riots of Camp Moria, Reaching Mithymna is a firsthand account of the crisis and an engaged exploration of the borders that divide us and the ties that bind.

Steven Heighton’s most recent books are The Nightingale Won’t Let You Sleep, a novel that has just been optioned for film, and The Waking Comes Late, which received the 2016 Governor General’s Award for Poetry. His work has received four gold National Magazine Awards and has appeared in Granta, Tin House, Zoetrope, London Review of Books, Best American Mystery Stories, Best American Poetry, TLR, and five editions of Best Canadian Stories. His novel Afterlands was cited on year-end lists in the USA, the UK, and Canada, and is in pre-production for film. In 2020 he will publish two books, a nonfiction account of the Middle Eastern refugee influx on Lesvos, Greece, and a children's book drawing on the same events. Heighton is also a translator, an occasional teacher, and a reviewer for the New York Times Book Review.