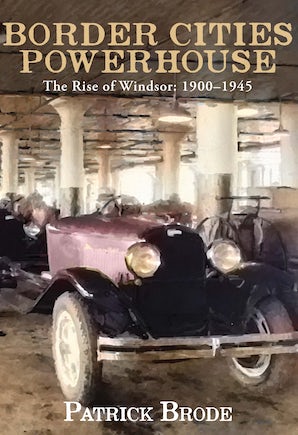 This is the first comprehensive history of the Border Cities area during its formative period in the first half of the 20th Century. The story of Windsor’s emergence during this period is largely one of confrontation and conflict: a multicultural population, industrial expansion, radical politics, and military production all played their part in the city's early history.

Patrick Brode was born in Windsor in 1950 and educated there. He graduated from Windsor Law School, was called to the Ontario bar in March 1977, has practised law ever since. His first book was a biography of an early Ontario judge, Sir John Beverley Robinson (1984) which was short-listed for the City of Toronto Book Award. His second book was a case study of an escaped slave wanted in Ontario for murder in 1860, The Odyssey of John Anderson, which was short-listed for Ontario’s Trillium Award in 1990. His other books have dealt with the evolution of the law and society. The Slasher Killings, Brode's 2009 study of a serial killer in Windsor who was stalking gay men was nominated for the Crime Writers of Canada’s Arthur Ellis Award and is currently under pre-production for a film treatment.