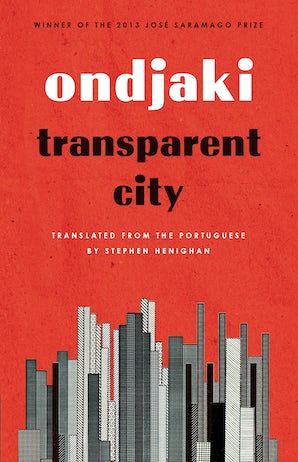 By Ondjaki Translated by Stephen Henighan

A VULTURE MUST-READ TRANSLATED BOOK FROM THE PAST 5 YEARS

A LIT HUB FAVOURITE BOOK OF THE YEAR

In a crumbling apartment block in the Angolan city of Luanda, families work, laugh, scheme, and get by. In the middle of it all is the melancholic Odonato, nostalgic for the country of his youth and searching for his lost son. As his hope drains away and as the city outside his doors changes beyond all recognition, Odonato’s flesh becomes transparent and his body increasingly weightless. A captivating blend of magical realism, scathing political satire, tender comedy, and literary experimentation, Transparent City offers a gripping and joyful portrait of urban Africa quite unlike any before yet published in English, and places Ondjaki, indisputably, among the continent’s most accomplished writers.

Ondjaki was born in Luanda, Angola in 1977. He is the author of five novels, four short-story collections, and numerous books of poems and stories for children. He has also made a documentary film, May Cherries Grow, about his native city. His books have been translated into more than a dozen languages.

In 2008 Ondjaki was awarded the Grinzane for Africa Prize in the category of Best Young Writer. In 2012 The Guardian named him one of its “Top Five African Writers.” Transpar-ent City won the 2013 José Saramago Prize in Portugal, and, in France, the 2015 Prix Trans-fuge for Best African Novel and a 2016 Prix Littérature-Monde from the St. Malo World Literature Festival.