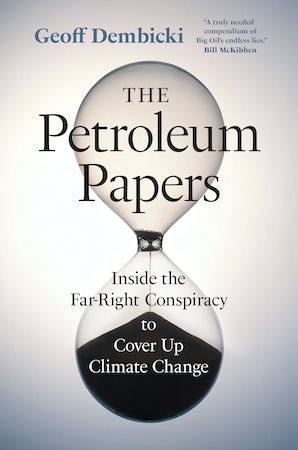 Inside the Far-Right Conspiracy to Cover Up Climate Change

"Essential … This book belongs on the shelf next to Merchants of Doubt, Dark Money, and Kochland."—Roy Scranton, author of Learning to Die in the Anthropocene

"The petroleum industry is guilty of a Big Tobacco–style public cover-up, according to this vivid exposé."—Publishers Weekly STARRED Review

Burning fossil fuels will cause catastrophic global warming: this is what top American oil executives were told by scientists in 1959. But they ignored that warning. Instead, they developed one of the biggest, most polluting oil sources in the world—the oil sands in Alberta, Canada. As investigative journalist Geoff Dembicki reveals in this explosive book, the decades-long conspiracy to keep the oil sands flowing into the U.S. would turn out to be one of the biggest reasons for the world’s failure to stop the climate crisis.

In The Petroleum Papers, Dembicki draws from confidential oil industry documents to uncover for the first time how companies like Exxon, Koch Industries, and Shell built a global right-wing echo chamber to protect oil sands profits—a misinformation campaign that continues to this day. He also tells the high-stakes stories of people fighting back: a Seattle lawyer who brought down Big Tobacco and is now going after Big Oil, a Filipina activist whose family drowned in a climate disaster, and a former Exxon engineer pushed out for asking hard questions.

With experts now warning we have less than a decade to get global emissions under control, The Petroleum Papers provides a step-by-step account of how we got to this precipice—and the politicians and companies who deserve our blame.

Published in Partnership with the David Suzuki Institute

"The petroleum industry is guilty of a Big Tobacco–style public cover-up, according to this vivid exposé.”
—Publishers Weekly STARRED Review

"A truly needed compendium of Big Oil's endless lies—Geoff Dembicki has done the world a tremendous favor. Hopefully we'll act on it; if not, it will be a great resource for any future historians wondering why and how we let the petroleum-industrial complex do such damage."
—Bill McKibben, author of The End of Nature and Falter and cofounder of 350.org

"A terrific and engaging book with great new investigative material. The Petroleum Papers reveals how the Koch brothers, Exxon and other key players in the Canadian tar sands led a decades-long campaign to misinform the public about climate change. Dembicki has provided us with a compelling narrative of the efforts fossil fuel companies took to profit from planet destroying fuels despite extensive knowledge of the dangers.”
—Robert Brulle, Visiting Professor of Environment and Society, Brown University

“Dembicki's painstaking journalism and research help reveal a global kleptocracy as cold-blooded as they are deluded; this book belongs on the shelf next to Naomi Oreskes and Erik Conway’s Merchants of Doubt, Jane Mayer’s Dark Money, and Christopher Leonard’s Kochland. An essential chapter in the tragic story of our collective failure to stop catastrophic climate change.”
—Roy Scranton, author of Learning to Die in the Anthropocene

“Dembicki documents how oil industry executives willfully ignored the findings of their own scientists, then spent nearly thirty years sowing confusion in order to paralyze public debate... Read this book on the power of lies and scream.”
— Andrew Nikiforuk, author of Tar Sands