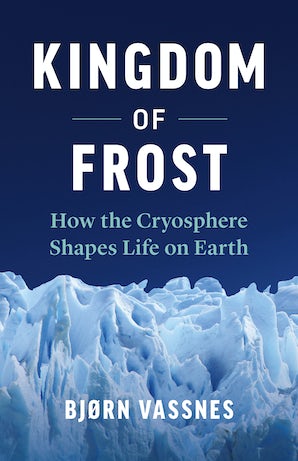 How the Cryosphere Shapes Life on Earth

An award-winning science journalist explains what Earth’s frozen waters tell us about the past, present, and future of humanity.

“The Kingdom of Frost,” or what scientists call the cryosphere, refers to all of Earth’s frozen waters. Glaciers, ice caps, and fields of Arctic snow—the cryosphere is vital to our survival. It supplies us with water and helps cool cities from Bangladesh to Bangkok, Los Angeles to Oslo.

In this captivating, eye-opening account, esteemed Norwegian writer Bjørn Vassnes interweaves brilliant climate reporting with the fascinating story of Earth’s frozen world. He draws on cultural history and anthropology to tell us how the cryosphere once helped to spark life on Earth—and how it continues to sustain us despite its shrinking size.

And he answers pressing questions such as: What will happen if it all disappears?

Bjørn Vassnes grew up in the Norwegian Arctic, one of the coldestplaces on earth. He is one of Norway’s leading science journalists, has won national and international writing prizes including the Fritt Ord Honorary Award and the Golden Pen. He has a science column in one of Norway’s top daily newspapers and has written several popular books and produced television programs with scientific and environmental themes.