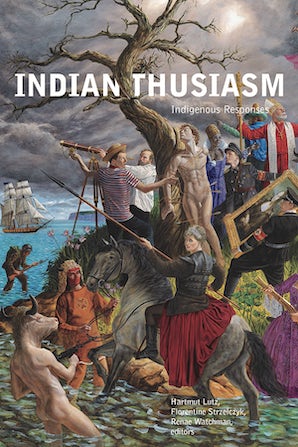 Indianthusiasm refers to the European fascination with, and fantasies about, Indigenous peoples of North America, and has its roots in nineteenth-century German colonial imagination.

Often manifested in romanticized representations of the past, Indianthusiasm has developed into a veritable industry in Germany and other European nations: there are Western and so-called “Indian” theme parks and a German hobbyist scene that attract people of all social backgrounds and ages to join camps and clubs that practise beading, powwow dancing, and Indigenous lifestyles.

Containing interviews with twelve Indigenous authors, artists, and scholars who comment on the German fascination with North American Indigenous Peoples, Indianthusiasm is the first collection to present Indigenous critiques and assessments of this phenomenon. The volume connects two disciplines and strands of scholarship: German Studies and Indigenous Studies, focusing on how Indianthusiam has created both barriers and opportunities for Indigenous peoples with Germans and in Germany.