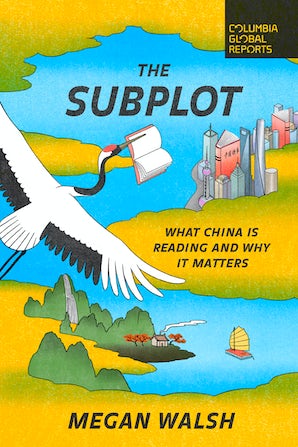 What China Is Reading and Why It Matters

What does contemporary China's diverse and exciting fiction tell us about its culture, and the relationship between art and politics?

The Subplot takes us on a lively journey through a literary landscape like you’ve never seen before: a vast migrant-worker poetry movement, homoerotic romances by “rotten girls,” swaggering literary popstars, millionaire e-writers churning out the longest-ever novels, underground comics, the surreal works of Yu Hua, Yan Lianke, and Nobel laureate Mo Yan, and what is widely hailed as a golden age of Chinese science fiction. Chinese online fiction is now the largest publishing platform in the world.

Fueled by her passionate engagement with Chinese literature and culture, Megan Walsh, a brilliant young critic, shows us why it’s important to finally pay attention to Chinese fiction—an exuberant drama that illustrates the complex relationship between art and politics, one that is increasingly shaping the West as well. Turns out, writers write neither what their government nor foreign readers want or expect, and they work on a different wavelength to keep alive ideas and events that are either overlooked or off limits. The Subplot vividly captures the ways in which literature offers an alternative—perhaps truer—understanding of the contradictions that make up China itself.

Megan Walsh is a journalist and writer from London, who specializes in Chinese literature and film. She worked at Condé Nast and The Daily Telegraph, before moving to the books desk at The Times of London until 2013. While at The Times she reported on contemporary art and literature in China, Russia and Northern Iraq, was on the judging panel for The Forward Poetry Prize and chaired a discussion about Chinese fiction at The London Book Fair. Megan then moved to Beijing, followed by Taipei, before completing a masters in Chinese Literature and Film at SOAS. In recent years as a freelance journalist she has written about Chinese film, art and books for The New Statesman, The Times of London, Lithub and The Wall Street Journal.