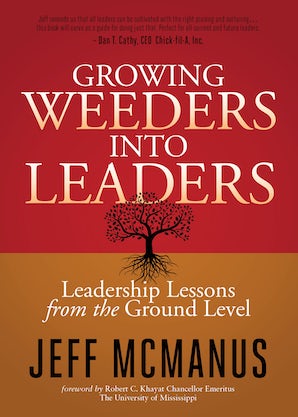 Leadership Lessons from the Ground Up

Aristotle and Nike got it right – GREATNESS is what we humans DO – when given the challenge, the encouragement, the environment, and the opportunity.
At some point in this postmodern life, individual greatness has lost its appeal for many of us. It has been commodified and relegated to those who are measured by shortest/longest times, impressive distances, highest heights, lowest lows, medals won, honors given…and again…Aristotle and Nike got it right…GREATNESS is what we can DO…every day…without recognition or reward, but for the satisfaction that comes from meeting the challenge, creating a team, and overcoming the odds. And that is what Growing Weeders into Leaders is about. It is an entertaining and thoughtful look into the hearts and the workday lives of ordinary people - just like you and me - who tapped into their inner greatness in pursuit of a vision. Creating one of America's most beautiful college campuses, at Ole Miss, did not happen overnight and, inside these pages, Jeff McManus describes the joys, the defeats, the brilliant problem-solving and the "best laid plans" that are proven worthless...until the bigger picture is told. It is the "bigger picture" told from the ground level. Growing Weeders into Leaders takes you through the practical applications of empowering people to experience not only what it means to grow outstanding landscapes, but also to grow greatness in themselves and encourage it in others.

Doing more with less is a 21st century mandate and no one knows this better than a Director of Landscape Services. Jeff McManus, CGM, has found unique ways of meeting that mandate by developing a dedicated, thoughtful and inspiring work force. Jeff’s GROW-Theory, which is based on the belief that all humans either strive for or have within them the elements of Greatness, Resiliency, Opportunity and Wisdom, has been fruitful on the Ole Miss campus. McManus developed Landscape University™ to intrinsically motivate his employees personally, while training them professionally. Jeff has a bachelor's degree in Landscape and Ornamental Horticulture from Auburn University and is the recipient of the 2016 Horticulture Alumni of the year. He is also an International Society of Arboriculture Certified Arborist. Jeff has been with the University of Mississippi since 2000 as Director of Landscape Services. During those years Jeff and his team have gained national recognition for their attention to detail and eye for beauty. Under Jeff’s leadership the Ole Miss campus has won the National Professional Grounds Maintenance Society Best Maintained Campus twice, Newsweek’s most beautiful campus in 2011 and was named by the Princeton Review as the 2013 most beautiful campus. Jeff led his team in some creative waste management, which caught the attention of The New York Times, November 1, 2014. Jeff is a popular speaker and trainer for local, state and national organizations and industry. His first book Pruning Like A Pro has garnered attention for its fun and simple approach to the gardener’s dilemma…pruning!