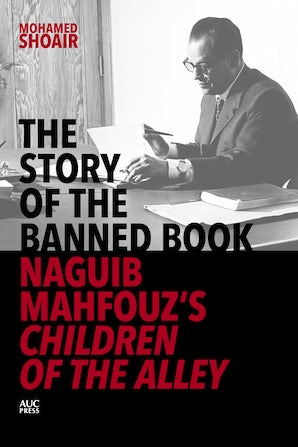 The Story of the Banned Book

Naguib Mahfouz's Children of the Alley

Naguib Mahfouz’s novel Children of the Alley has been in the spotlight since it was first published in Egypt in 1959. It has been at times banned and at others allowed, sold sometimes under the counter and sometimes openly on the street, often pirated and only recently legally reprinted. It has inspired anxiety among the secular authorities, rage within the religious right, and a drawing of battle lines among Arab intellectuals and writers. It dogged Mahfouz like a curse throughout the remainder of his career, led to his attempted assassination, and sparked a public debate that continues to this day, even after the author’s death in 2006. It is Egypt’s iconic novel, in whose mirror millions have seen themselves, their society, and even the universe, some finding truth, others blasphemy.

In this award-winning account, Mohamed Shoair traces the story of Mahfouz’s novel as a cultural and political object, from its first publication to the present via Mahfouz’s award of the Nobel prize for literature in 1988 and the attempt on his life in 1994. He presents the arguments that swirled about the novel and the wide cast of Egyptian figures, from state actors to secular intellectuals and Islamists, who took part in them. He also contextualizes the interactions among the principal characters, interactions that have done much to shape the country’s present.

Extensively researched and written in a lucid, accessible style, The Story of the Banned Book is both a gripping work of investigative journalism and a window onto some of the fiercest debates around culture and religion to have taken place in Egyptian society over the past half-century.

Mohamed Shoair is an Egyptian critic and journalist, and managing editor of the literary magazine Akhbar al-adab. Born in 1974, he studied English literature at South Valley University in Qena, Egypt. He is the winner of numerous awards, including the Dubai Prize for Journalism. The Story of the Banned Book won the Sawiris Prize for Literary Criticism and was longlisted for the Sheikh Zayed Book Award. It is his first book to be available in English.

Humphrey Davies (1947–2021) translated some thirty book-length works from Arabic, including The Yacoubian Building by Alaa Al Aswany, and was a two-time winner of the Banipal Prize for Arabic Literary Translation.