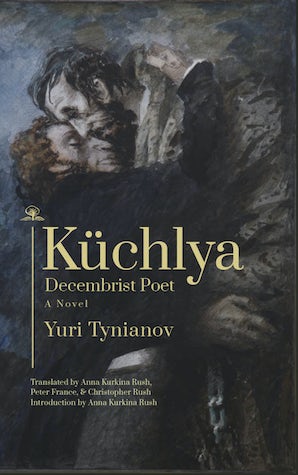 The poet Wilhelm Küchelbecker, Pushkin’s school-friend, suffered twenty years of imprisonment and Siberian exile for his part in the ill-fated Decembrist rising of 1825 against the Russian autocracy. His largely forgotten life and work are vividly recreated in Küchlya (1925), a pioneering historical novel by the eminent literary scholar and Formalist theorist Yuri Tynianov. Writing at a time when Stalin was tightening his grip on Soviet culture and society, Tynyanov implicitly brings together the disquieting experiences of the 1820s and the 1920s. In a lively, innovative style, his gripping and moving narrative, here translated for the first time, evokes the childhood, youth, beliefs and often absurd adventures of a Quixotic, idealistic protagonist against the richly complex backdrop of post-Napoleonic Russian society.

Yuri Tynianov (1894-1943) was a Russian writer and literary theorist, and a central figure among the revolutionary-era scholars who came to be known as the Russian Formalists.

Anna Kurkina Rush taught Russian at George Watson’s College (Edinburgh) and the University of St Andrews of which she holds a doctorate. Together with Christopher Rush she translated Tynyanov’s novel Pushkin (2007) and The Death of Vazir-Mukhtar (Columbia UP, 2021). She is currently working on a monograph about representation of Pushkin in Tynyanov’s historical novels.

Peter France, who lives in Edinburgh, is the author and editor of many books on Russian, French and comparative literature, including Poets of Modern Russia (1982) and the Oxford Guide to Literature in English Translation (2000). He has translated numerous volumes of Russian poetry, from Baratynsky and Batyushkov to Mandelstam and Aygi.

Christopher Rush is the author of 25 critically acclaimed books in various genres: poetry, prose fiction, biography, besides his work as editor, memoirist, screenplay writer and writer of academic and literary essays.