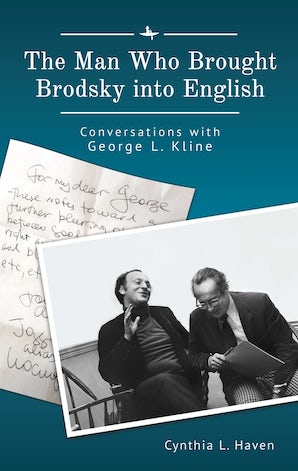 The Man Who Brought Brodsky into English

Jews of Russia & Eastern Europe and Their Legacy

Brodsky’s poetic career in the West was launched when Joseph Brodsky: Selected Poems was published in 1973. Its translator was a scholar and war hero, George L. Kline. This is the story of that friendship and collaboration, from its beginnings in 1960s Leningrad and concluding with the Nobel poet's death in 1996.

Kline translated more of Brodsky’s poems than any other single person, with the exception of Brodsky himself. The Bryn Mawr philosophy professor and Slavic scholar was a modest and retiring man, but on occasion he could be as forthright and adamant as Brodsky himself. “Akhmatova discovered Brodsky for Russia, but I discovered him for the West,” he claimed.

Kline’s interviews with author Cynthia L. Haven before his death in 2015 include a description of his first encounter with Brodsky, the KGB interrogations triggered by their friendship, Brodsky's emigration, and the camaraderie and conflict over translation. When Kline called Brodsky in London to congratulate him for the Nobel, the grateful poet responded, “And congratulations to you, too, George!”

Cynthia L. Haven is a National Endowment for the Humanities Public Scholar and author of 2018's Evolution of Desire: A Life of René Girard, the first-ever biography of the French theorist. She has been a Milena Jesenská Journalism Fellow with the Institut für die Wissenschaften vom Menschen in Vienna, as well as a visiting writer and scholar at Stanford’s Division of Literatures, Cultures, and Languages, and a Voegelin Fellow at Stanford’s Hoover Institution. Her Joseph Brodsky: Conversations was published in 2003. Her“Spirit of the Place”: Czesław Miłosz in California is forthcoming. She has written for The Times Literary Supplement, and has also contributed to The New York Times Book Review, The Nation, The Wall Street Journal, The Virginia Quarterly Review, The Washington Post, The Los Angeles Times, and others. Her work has appeared in Russia's Zvezda and Colta.