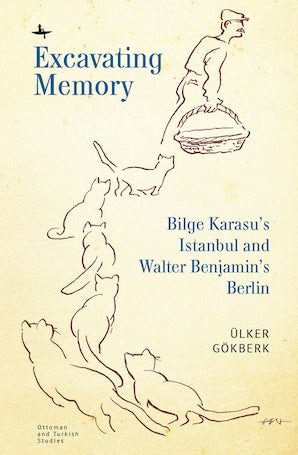 This study moves the acclaimed Turkish fiction writer Bilge Karasu (1930–1995) into a new critical arena by examining his poetics of memory, as laid out in his narratives on Istanbul’s Beyoğlu, once a cosmopolitan neighborhood called Pera. Karasu established his fame in literary criticism as an experimental modernist, but while themes such as sexuality, gender, and oppression have received critical attention, an essential tenet of Karasu’s oeuvre, the evocation of ethno-cultural identity, has remained unexplored: Excavating Memory brings to light this dimension. Through his non-referential and ambiguous renderings of memory, Karasu gives in his Beyoğlu narratives unique expression to ethno-cultural difference in Turkish literature, and lets through his own repressed minority identity. By using Walter Benjamin’s autobiographical work as a heuristic premise for illuminating Karasu, Gökberk establishes an innovative intercultural framework, which brings into dialogue two representative writers of the twentieth century over temporal and spatial distances.

Ülker Gökberk is Professor Emerita of German and Humanities at Reed College. The methodology and themes of her scholarship have been largely inspired by the paradigm intercultural German Studies. In her publications she has focused on models of cultural encounter and on different facets of alterity. Gökberk has worked with texts by German authors, ranging from Thomas Mann to Siegfried Lenz, as well as with those by Turkish-German authors. Her publications on modern Turkish literature include essays on Orhan Pamuk and Bilge Karasu. Aesthetic representations of displacement remain an ongoing concern of Gökberk’s critical inquiry.