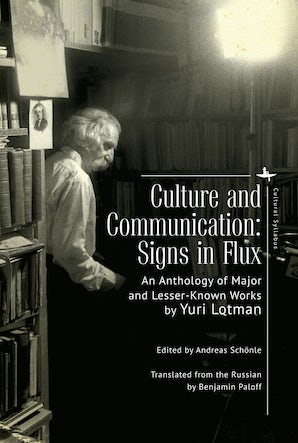 Signs in Flux. An Anthology of Major and Lesser-Known Works

Yuri Lotman (1922-1993) was one of the most prominent and influential scholars of the twentieth century working in the Soviet Union. A co-founder of the Tartu-Moscow school of semiotics, he applied his mind to a wide array of disciplines, from aesthetics to literary and cultural history, narrative theory to intellectual history, cinema to mythology. This collection provides a stand-alone primer to his intellectual legacy in both semiotics and cultural history. It includes new translations of some of his major pieces as well as works that have never been published in English. The collection brings Lotman into the orbit of contemporary concerns such as gender, memory, performance, world literature, and urban life. It is aimed at students from various disciplines and is augmented by an introduction and notes that elucidate the relevant contexts.

Andreas Schönle is Professor of Russian at the University of Bristol and Fellow of the British Academy. He is the author of four monographs and three edited volumes. His most recent monograph is On the Periphery of Europe, 1762-1825: The Self-Invention of the Russian Elite (2018), co-authored with Andrei Zorin.

Benjamin Paloff is Associate Professor of Slavic Languages and Literatures and of Comparative Literature at the University of Michigan. His books include Lost in the Shadow of the Word: Space, Time, and Freedom in Interwar Eastern Europe and the poetry collections And His Orchestra and The Politics, and he is the translator, most recently, of Dorota Masłowska's Honey, I Killed the Cats.