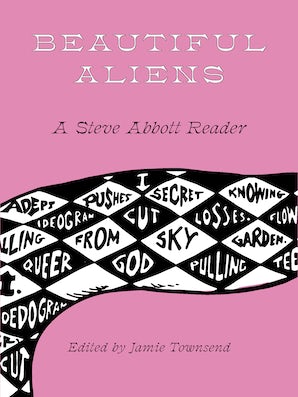 Beautiful Aliens: A Steve Abbott Reader is a landmark collection representing the visionary life’s work of beloved Bay Area luminary Steve Abbott. It brings together a broad cross-section of literary and artistic work spanning three decades of poetry, fiction, collage, comics, essays, and autobiography, including underground classics like, Lives of the Poets and Holy Terror, rare pieces of treasured ephemera, and previously unpublished material, representing a survey of Abbott’s multivalent practice, as well as reinforcing his essential role within the contemporary canon of queer arts.

Steve Abbott (1943-1992) was a poet, critic, editor, novelist and artist. Abbott was raised in Lincoln, Nebraska, graduated from the University of Nebraska, and attended Emory University where he was an organizer for Atlanta's Gay Liberation Front and the gay lib editor at the underground paper The Great Speckled Bird. Abbott moved to San Francisco in 1974 where he became was a frequent contributor to local publications, including The Advocate, The Sentinel, and the Bay Area Reporter. He was also one of the founding editors of the literary arts newsletter Poetry Flash and the publisher/editor of the literary journal Soup. Steve wrote a number of books of poetry and prose during the 1980s and early 90s including: “Wrecked Hearts”, “Stretching the Agape Bra”, “Lives of the Poets”, “Holy Terror”, “Skinny Trip to a Far Place”, and “View Askew: Postmodern Investigations”, a book that collects Steve's essays from The San Francisco Sentinel, The Advocate, and the arts journal Mirage. He was active in various reading series and discussion groups in the Bay Area, including Cloud House and Small Press Traffic, and, in 1981, he co-organized the historic Left/Write conference. Steve was also a respected critic and the first to use the term "New Narrative" to describe the work of contemporaries including Bruce Boone and Robert Gluck. Abbott died of complications due to AIDS on December 2, 1992. His novel The Lizard Club was published posthumously. Jamie Townsend is a genderqueer poet, publisher, and editor living in Oakland, California. They are half-responsible for Elderly, a publishing experiment and persistent hub of ebullience and disgust. They are the author of several chapbooks including, most recently, Pyramid Song (2018) as well as the full-length collection SHADE (2015). An essay on the history of the New Narrative magazine Soup was published in The Bigness of Things: New Narrative and Visual Culture (2017).