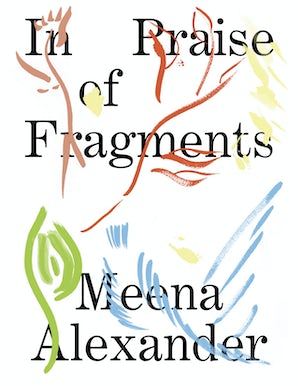 In Praise of Fragments

In Praise of Fragments is a collection of various and inter-related works, including a sequence of poems written about Venetian Jewish poet Sarra Copia Sulam (1592–1641), lyric essays about Venice, a suite of poems about Hyderabad, where Alexander lived for many years, and a series of brief sketches of memoir about her childhood in Kerala, the subject of her groundbreaking memoir Fault Lines. The writings are accompanied by a series of sumi ink drawings by Alexander and an afterword by Leah Suffrant.

Meena Alexander was born in Allahabad, India. She turned five on the Indian Ocean, on the journey with her mother from India to Sudan. She was raised both in Kerala, South India and in Khartoum, Sudan. Her books of poetry include Atmospheric Embroidery, Birthplace with Buried Stones, Quickly Changing River, Raw Silk, and Illiterate Heart (all published by Northwestern University Press). Her prose writings on trauma, migration and memory collected in The Shock of Arrival: Reflections on Postcolonial Experience and Poetics of Dislocation are relevant to the evolving understanding of postcoloniality. A book of essays on her work has appeared: Passage to Manhattan: Critical Essays on Meena Alexander (eds. Lopamudra Basu and Cynthia Leenerts, Cambridge Scholars Publishing, 2009). She has also published two novels Nampally Road (1991/ 2012 – republished by Orient Blackswan) and Manhattan Music. Her academic studies include The Poetic Self: Towards a Phenomenology of Romanticism and Women in Romanticism: Mary Wollstonecraft, Dorothy Wordsworth and Mary Shelley. She has edited Indian Love Poems from the Everyman’s series, and published a critically acclaimed memoir Fault Lines (picked as one of Publishers Weekly’s Best Books of the year).

Meena Alexander was the recipient of the 2009 Distinguished Achievement Award in Literature from the South Asian Literary Association (an organization allied to the Modern Languages Association) for contributions to American literature. In 2014, Meena Alexander was named a National Fellow at the Indian Institute of Advanced Study. She was Distinguished Professor of English and Women’s Studies at the City University of New York and taught in the PhD Program in English at CUNY Graduate Center and in the English Department at Hunter College. Meena Alexander passed away in 2018.