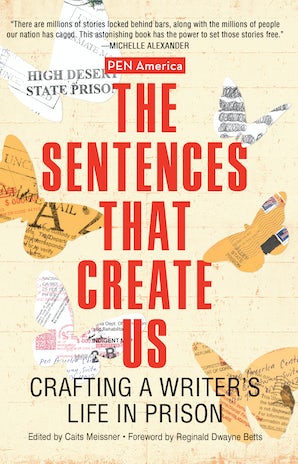 The Sentences That Create Us

Crafting A Writer’s Life in Prison

“This is one of the best books on writing that I've ever read. I couldn't put it down.”
—Michelle Alexander, author of The New Jim Crow

The Sentences That Create Us provides a road map for incarcerated people and their allies to have a thriving writing life behind bars—and shared beyond the walls—that draws on the unique insights of more than fifty contributors, most themselves justice-involved, to offer advice, inspiration and resources.

The Sentences That Create Us draws from the unique insights of over fifty justice-involved contributors and their allies to offer inspiration and resources for creating a literary life in prison. Centering in the philosophy that writers in prison can be as vibrant and capable as writers on the outside, and have much to offer readers everywhere,  The Sentences That Create Us aims to propel writers in prison to launch their work into the world beyond the walls, while also embracing and supporting the creative community within the walls.

The Sentences That Create Us is a comprehensive resource writers can grow with, beginning with the foundations of creative writing. A roster of impressive contributors including Reginald Dwayne Betts (Felon: Poems), Mitchell S. Jackson (Survival Math), Wilbert Rideau (In the Place of Justice) and Piper Kerman (Orange is the New Black), among many others, address working within and around the severe institutional, emotional, psychological and physical limitations of writing prison through compelling first-person narratives. The book’s authors offer pragmatic advice on editing techniques, pathways to publication, writing routines, launching incarcerated-run prison publications and writing groups, lesson plans from prison educators and next-step resources.

Threaded throughout the book is the running theme of addressing lived trauma in writing, and writing’s capacity to support an authentic healing journey centered in accountability and restoration. While written towards people in the justice system, this book can serve anyone seeking hard won lessons and inspiration for their own creative—and human—journey.

Founded in 1922, PEN America stands at the intersection of literature and human rights to protect free expression in the United States and worldwide. PEN America is the largest of the more than 100 centers worldwide that comprise the PEN International network. Our membership forms a nationwide community of writers and literary professionals, as well as devoted readers and supporters who join with them to carry out PEN America’s mission. PEN America advocates for writers under threat worldwide and public policies that bolster freedom of speech; celebrates the literature of eminent and emerging writers through awards, publications, festivals, and public programming; produces original research on pressing threats to free expression; and offers platforms to lift up the work and views of those whose voices have too often gone unheard or been ignored. PEN America’s Prison and Justice Writing Program, founded in 1971 in the wake of the Attica riots, advances the transformative possibilities of writing, and has offered many thousands of incarcerated writers free access to literary resources, skilled writing mentors, and audiences for their work. Our program extends PEN America’s mission of supporting free expression, and encourages the use of the written word as a legitimate form of power.


Caits Meissner is the Director of Prison and Justice Writing at PEN America. She is also the author and illustrator of hybrid poetry book Let It Die Hungry (The Operating System, 2016). A multidisciplinary creator, Meissner's written and visual work has been published in venues including The Guardian, Harper's Bazaar, Medium's Human Parts, The Literary Review, Narrative, Adroit, Drunken Boat, Literary Hub, The Rumpus, [Pank], The Journal and The Offing, among others.