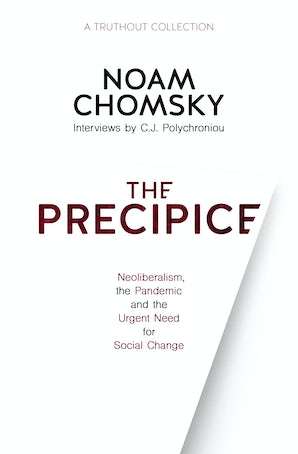 Neoliberalism, the Pandemic and the Urgent Need for Social Change

By Noam Chomsky and C.J. Polychroniou

In The Precipice, Noam Chomsky sheds light into the phenomenon of Trumpism, exposes the catastrophic nature and impact of Trump’s policies on people, the environment, and the planet as a whole, and captures the dynamics of the brutal class warfare launched by the masters of capital to maintain and even enhance the features of a dog-eat–dog society to the unprecedented mobilization of millions of people against neoliberal capitalism, racism, and police violence.

Noam Chomsky is Institute Professor (emeritus) in the Department of Linguistics and Philosophy at the Massachusetts Institute of Technology and Laureate Professor of Linguistics and Agnese Nelms Haury Chair in the Program in Environment and Social Justice at the University of Arizona. His work is widely credited with having revolutionized the field of modern linguistics.Chomsky is the author of numerous best-selling political works, which have been translated into scores of countries worldwide. Recent books include What Kind of Creatures Are We?, as well as Optimism and Despair, and Internationalism of Extinction.

C.J. Polychroniou is a political economist/political scientist who has taught and worked in universities and research centers in Europe and the United States. He has also worked as a journalist and is author and editor of scores of books.