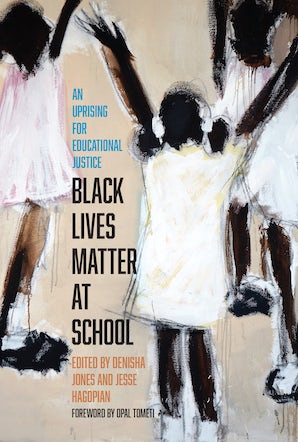 An Uprising for Educational Justice

By Jesse Hagopian and Denisha Jones Foreword by Opal Tometi

Contributors include Opal Tometi, who wrote a moving foreword, Bettina Love who shares a powerful chapter on abolitionist teaching, Brian Jones who centers Black Lives Matter at School in the historical context of the ongoing struggle for racial justice in education and prominent teacher union leaders from Chicago to Los Angeles and beyond who discuss the importance of anti-racist struggle in education unions. The book includes essays, interviews, poems, resolutions, and more from educators, students and parents around the country who have been building Black Lives Matter at School on the ground.

Denisha Jones is a member of the national Black Lives Matter at School steering committee and Director of the Art of Teaching, graduate teacher education program, at Sarah Lawrence College. After earning her bachelor’s degree in early childhood education from the University of the District of Columbia, Denisha worked as a kindergarten and preschool teacher, and a preschool director. She earned her Ph.D. in Curriculum and Instruction from Indiana University in 2013. In 2018, she earned her Juris Doctor from the David A. Clarke School of Law at the University of the District of Columbia. Denisha is an education justice advocate and activist. She serves as Co-Director for Defending the Early Years, Inc, and is the Assistant Executive Director for the Badass Teachers Association. Currently, her research focuses on utilizing the BLM at School curriculum as cultural citizenship and documenting the value of play as a tool for liberation with an emphasis on global approaches to play.

Jesse Hagopian is a member of the Black Lives Matter at School steering committee and teaches Ethnic Studies at Seattle's Garfield High School. Jesse is an editor for Rethinking Schools magazine, the co-editor of the book, Teaching for Black Lives, and the editor of the book More Than a Score: The New Uprising Against High Stakes Testing. Jesse is a recipient of the 2013 Secondary School Teacher of the Year award and the Special Achievement Courageous Leadership award from the Academy of Education Arts and Sciences. In 2015, Jesse received the Seattle/King County NAACP Service Award. Jesse serves as the Director of the Black Education Matters Student Activist Award.