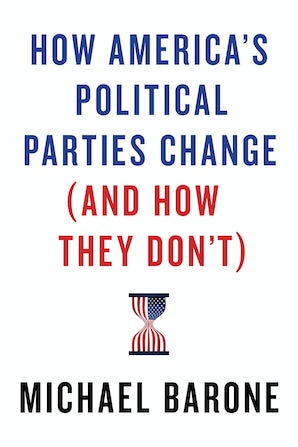 How America’s Political Parties Change (and How They Don’t)

The election of 2016 prompted journalists and political scientists to write obituaries for the Republican Party—or prophecies of a new dominance. But it was all rather familiar. Whenever one of our two great parties has a setback, we’ve heard: “This is the end of the Democratic Party,” or, “The Republican Party is going out of existence.” Yet both survive, and thrive.

We have the oldest and third oldest political parties in the world—the Democratic Party founded in 1832 to reelect Andrew Jackson, the Republican Party founded in 1854 to oppose slavery in the territories. They are older than almost every American business, most American colleges, and many American churches. Both have seemed to face extinction in the past, and have rebounded to be competitive again. How have they managed it?

Michael Barone, longtime co-author of The Almanac of American Politics, brings a deep understanding of our electoral history to the question and finds a compelling answer. He illuminates how both parties have adapted, swiftly or haltingly, to shifting opinion and emerging issues, to economic change and cultural currents, to demographic flux. At the same time, each has maintained a constant character. The Republican Party appeals to “typical Americans” as understood at a given time, and the Democratic Party represents a coalition of “out-groups.” They are the yin and yang of American political life, together providing vehicles for expressing most citizens’ views in a nation that has always been culturally, religiously, economically, and ethnically diverse.

The election that put Donald Trump in the White House may have appeared to signal a dramatic realignment, but in fact it involved less change in political allegiances than many before, and it does not portend doom for either party. How America’s Political Parties Change (and How They Don’t) astutely explains why these two oft-scorned institutions have been so resilient.

Michael Barone is Senior Political Analyst for the Washington Examiner and a Resident Fellow at the American Enterprise Institute. He grew up in Detroit and Birmingham, Michigan. He graduated from Harvard College (1966) and Yale Law School (1969), and was an editor of the Harvard Crimson and the Yale Law Journal.

Mr. Barone has been co-author of The Almanac of American Politics, the first edition of which edition appeared in 1971; the 25th edition is scheduled to be published in June 2017. He is also the author of Our Country: The Shaping of America from Roosevelt to Reagan (Free Press, 1990), The New Americans: How the Melting Pot Can Work Again (Regnery, 2001; paperback edition, July 2006), Hard America, Soft America: Competition vs. Coddling and the Competition for the Nation’s Future (Crown Forum, 2004; paperback edition, 2005), Our First Revolution: The Remarkable British Upheaval That Inspired America’s Founding Fathers (Crown Forum, 2007) and Shaping Our Nation: How Surges of Migration Transformed America and Its Politics (Crown Forum, October 2013).

Over the years he has written for many other publications in the United States and several other countries, including the Economist, the Times Literary Supplement and the Daily Telegraph and the Sunday Times of London. His weekly column is syndicated by Creators Syndicate.

Mr. Barone received the Bradley Prize from the Lynde and Harry Bradley Foundation in 2010, the Barbara Olsen Award from The American Spectator in 2006 and the Carey McWilliams Award from the American Political Science Association in 1992.

Mr. Barone lives in Washington, D.C. He has traveled to all 50 states and all 435 congressional districts, and also to 54 foreign countries.