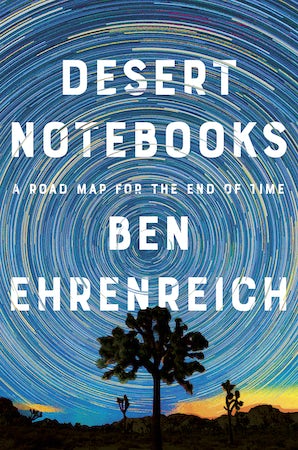 A Road Map for the End of Time

As inhabitants of the Anthropocene, what might some of our own histories tell us about how to confront apocalypse? And how might the geologies and ecologies of desert spaces inform how we see and act toward time—the pasts we have erased and paved over, this anxious present, the future we have no choice but to build? Desert Notebooks examines how the unprecedented pace of destruction to our environment and an increasingly unstable geopolitical landscape have led us to the brink of a calamity greater than any humankind has confronted before. Ehrenreich draws on the stark grandeur of the desert to ask how we might reckon with the uncertainty that surrounds us and fight off the crises that have already begun.

In the canyons and oases of the Mojave and in Las Vegas’s neon apocalypse, Ehrenreich finds beauty, and even hope, surging up in the most unlikely places, from the most barren rocks, and the apparent emptiness of the sky. For readers of Robert Macfarlane or Elizabeth Rush, Desert Notebooks is a vital and necessary chronicle of our past and our present—unflinching, urgent— yet timeless and profound.

BEN EHRENREICH writes about climate change for The Nation. His work has appeared in Harper’s Magazine, The New York Times Magazine, the London Review of Books, and Los Angeles magazine. In 2011, he was awarded a National Magazine Award. His last book, The Way to the Spring: Life and Death in Palestine, based on his reporting from the West Bank, was one of The Guardian’s Best Books of 2016. He is also the author of two novels, Ether and The Suitors.