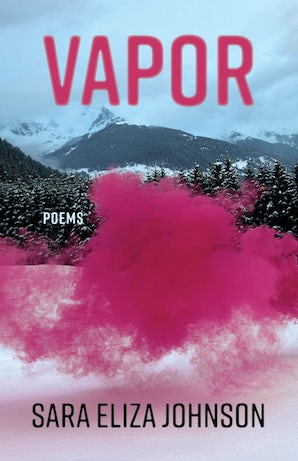 With a mind informed by physics, and a heart yearning for sky burial, Vapor’s epic vision swerves from the microscopic to telescopic, evoking an Anthropocene for a body and planet that are continually dying: “So alone / I open like a grave,” Johnson chronicles her love for “all this emptiness, this warp and transparence, the whorl of atoms I brush from your brow,” and considers how “each skull, / like a geode, holds a crystal colony inside.”

Almost omnipresently, Vapor stitches stars to microbes, oceans to space, and love to pain, collapsing time and space to converge everything at once. Blood and honey, fire and shadow, even death and mercy are secondary to a profoundly constant flux. Facing sunlight, Johnson wonders what it would mean to “put my mouth to its / mouth, suck the fluid / from its throat, and give / it my breath, my skin, / which was once my / shadow,” while elsewhere the moon “is molten, an ancient red, and at its bottom is an exit wound that opens into another sea, immaculate and blue, that could move a dead planet to bloom.”

In Vapor, Sara Eliza Johnson establishes herself as a profound translator of the physical world and the body that moves within it, delivering poems that show us how to die, and live.