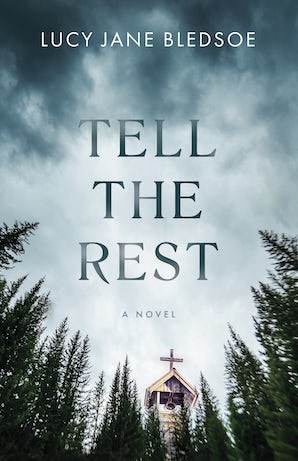 Two estranged childhood friends find themselves on parallel paths to return to the site of the conversion therapy camp that tore them apart.

“A multilayered gem of a novel, polished, intelligent, and moving. Tell the Rest deftly explores courage, drive, happiness, sexuality, love, and more in a riveting story that whisks readers along to a surprising and satisfying conclusion. I could not put it down.”

Delia Barnes and Ernest Wrangham met as teens at Celebration Camp, a church-supported conversion therapy program—a dubious, unscientific Christian practice meant to change a person’s sexuality. After witnessing a close friend suffer a devastating tragedy in the hands of the camp counselors, they escaped in the night, only to take separate roads to their distant homes.

They have no idea how each have fared through the years. Delia is a college basketball coach who prides herself on being an empowering and self-possessed role model for her players. But when she gets fired from her elite East Coast college and loses her wife to another woman in rapid succession, she returns to her hometown of Rockside, Oregon to coach the girls’ basketball team at her high school alma mater.

Ernest, meanwhile, is a renowned poet in New York City who’s left behind his loving husband for a temporary teaching job in Portland, Oregon. His work has always been boundary-pushing, fearless. But the poem he’s most wanted to write—about his dangerous escape from Celebration Camp—remains stubbornly out of reach.

Both remain on a mission to overcome the consequences and inhumane costs of conversion therapy. As events find them hurtling toward each other once again, they both grapple with the necessity of remaining steadfast in one’s truth—no matter how slippery that can be. Tell the Rest is a powerful novel about coming to terms—with family, history, violence, loss, sexuality, and ultimately, with love.

Lucy Jane Bledsoe is the author of several works of fiction, including A Thin Bright Line, which was a Lambda Literary Award and Ferro-Grumley Award finalist. She is the winner of an American Library Association Stonewall Award, a Yaddo Fellowship, a California Arts Council Fellowship in Literature, two National Science Foundation Artists & Writers Fellowships, and a finalist for the Northern California Independent Booksellers Association Fiction Award. A native of Portland, Oregon, she now lives in Berkeley, California.