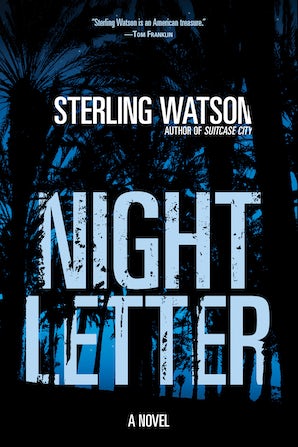 "Watson evocatively blends the dreamy, hormonally addled banality of teen life with the existential anxieties of lost innocence and regret. Fans of S.E. Hinton's rough-hewn teens and the gothic noir of Tennessee Williams will welcome this bittersweet tale of redemption."
—Publishers Weekly

"Watson does a good job with atmosphere, too, in this noirish coming-of-age novel whose convoluted plot will keep the pages turning."
—Booklist

Eighteen-year-old Travis Hollister is always the stranger who comes to town.

As a twelve-year-old escaping a disordered and unhappy home and parents who loved hard but couldn't make it work, Travis left the Midwest to spend a summer with his grandparents in the Deep South. There he met Delia, the love of his life, who, tragically, was beyond his reach for two reasons—she was his aunt and she was sixteen years old. That summer made Travis guilty of crimes discovered and undiscovered. For his public wrongs, he did time, six years in a Nebraska reform school. For his undiscovered wrongs, he suffers mightily and wants desperately to be shriven. Can he achieve redemption or is he bound for the hell on earth he can imagine all too well?

Driven by his need to rejoin the human community, he becomes the stranger who arrives in Panama City, Florida, searching for Delia, the aunt who was the idol of his twelve-year-old passion. Who is she now? What have the years done to her? Will she welcome the return of Travis or fear it? What will she do about the return of the stranger she once held to her teenage heart.

Jean Paul Sartre said, "Hell is other people." In the course of this story, Travis learns that other people can also be salvation. Amid a cast of characters struggling with their own needs, desires, tragedies, and, yes, crimes, Travis finds violence, hatred, vengeance, and, in greater measure, friendship, honor, loyalty, and at least a glimpse of the road to redemption.

Sterling Watson is the author of nine novels, including Deadly Sweet, Sweet Dream Baby, Fighting in the Shade, Suitcase City, and The Committee. Watson's short fiction and nonfiction have appeared in Prairie Schooner, the Georgia Review, the Los Angeles Times Book Review, the Michigan Quarterly Review, and the Southern Review. He was director of the creative writing program at Eckerd College for twenty years and now teaches at Lasell University in Newton, Massachusetts. Of his sixth novel, Suitcase City, Tom Franklin said, "If this taut literary crime novel doesn't center Sterling Watson on the map, we should change maps." Watson lives in Gulfport, Florida.