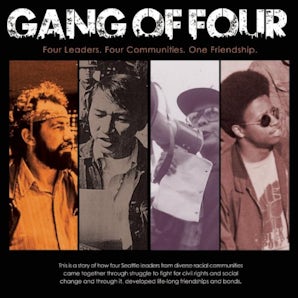 The Gang of Four

By Bob Santos and Gary Iwamoto

Seattle's Gang of Four changed the face of the city in the 1960s, '70s, and '80s by bringing four ethnic groups together in battle against city powerbrokers over development, poverty, fishing rights, and gentrification. The four leaders learned quickly that working together provided greater results than working apart. This is the story of a powerful political alliance and lifelong friendships forged through sit-ins, protest rallies, and other acts of civil disobedience. "We got very good at occupying buildings," remarked one of the Gang.

Bob Santos has spent most of his life in the International District of Seattle. He grew up in the N.P. Hotel with his widowed father, Sammy Santos, a professional prizefighter. He was hired in 1972 to lead the International District Improvement Association (Inter*Im). During his tenure at Inter*Im, Santos organized property owners, businesses, residents, and activists from the Asian American community to preserve the neighborhood and build new housing.

Gary Iwamoto is a regular contributing writer for the International Examiner, an Asian Pacific Islander community newspaper. He has written several plays, notably Miss Minidoka 1943, which was produced by the Northwest Asian American Theater. He and Bob Santos also wrote Humbows, Not Hot Dogs in 2002.