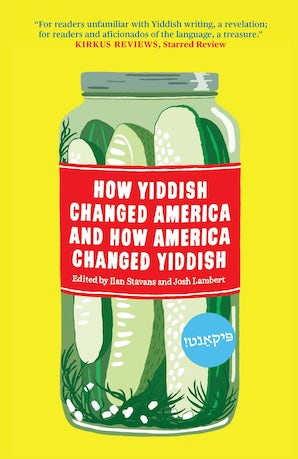 How Yiddish Changed America and How America Changed Yiddish

A momentous and diverse anthology of the influences and inspirations of Yiddish voices in America—radical, dangerous, and seductive, but also sweet, generous, and full of life—edited by award-winning authors and scholars Ilan Stavans and Josh Lambert.

Is it possible to conceive of the American diet without bagels? Or Star Trek without Mr. Spock? Are the creatures in Maurice Sendak’s Where the Wild Things Are based on Holocaust survivors? And how has Yiddish, a language without a country, influenced Hollywood? These and other questions are explored in this stunning and rich anthology of the interplay of Yiddish and American culture, edited by award-winning authors and scholars Ilan Stavans and Josh Lambert.

Readers will laugh and cry as they delve into personal stories of assimilation and learn about people from a diverse variety of backgrounds, Jewish and not, who have made the language their own. The Yiddish saying states: Der mentsh trakht un got lakht. Man plans and God laughs. How Yiddish Changed America and How America Changed Yiddish illustrates how those plans are full of zest, dignity, and tremendous humanity.