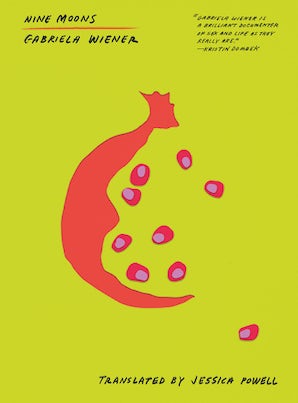 From the daring Peruvian essayist and provocateur behind Sexographies comes a fierce and funny exploration of sex, pregnancy, and motherhood that delves headlong into our fraught fascination with human reproduction.

Women play all the time with the great power that’s been conferred upon us: it’s fun to think about reproducing. Or not reproducing. Or walking around in a sweet little dress with a round belly underneath that will turn into a baby to cuddle and spoil. When you’re fifteen, the idea is fascinating, it attracts you like a piece of chocolate cake. When you’re thirty, the possibility attracts you like an abyss.

Gabriela Wiener is not one to shy away from unpleasant truths or to balk at a challenge. She began her writing career by infiltrating Peru’s most dangerous prison, going all in at swingers clubs, ingesting ayahuasca in the Amazon jungle. So at 30, when she gets unexpectedly pregnant, she looks forward to the experience the way a mountain climber approaches a precipitous peak.

With a scientist’s curiosity and a libertine’s unbridled imagination, Wiener hungrily devours every scrap of information and misinformation she encounters during the nine months of her pregnancy. She ponders how pleasure and pain always have something to do with things entering or exiting your body. She laments that manuals for pregnant women don’t prepare you for ambushes of lust or that morning sickness is like waking up with a hangover and a guilty conscience all at once. And she tries to navigate the infinity of choices and contradictory demands a pregnant woman confronts, each one amplified to a life-and-death decision.

While pregnant women are still placed on pedestals, or used as political battlegrounds, or made into passive objects of study, Gabriela Wiener defies definition. With unguarded humor and breathtaking directness, Nine Moons questions the dogmas, upends the stereotypes, and embraces all the terror, beauty, and paradoxes of the propagation of the species.

Jessica Powell received her BA in International Studies from Vassar College, her MA in Latin American Studies from Stanford University, and completed her Ph.D. in UCSB’s Department of Spanish and Portuguese, specializing in literary translation and twentieth-century Latin American Literature. Since completing her doctorate in 2006, she has published dozens of translations of literary works by a wide variety of Latin American writers. She was the recipient of a 2011 National Endowment for the Arts Translation Fellowship in support of her translation of Antonio Benítez Rojo's novel Woman in Battle Dress (City Lights, 2015), which was a finalist for the PEN Center USA Literary Award for Translation. Her translation of Wicked Weeds by Pedro Cabiya (Mandel Vilar Press, 2016), was named a finalist for the 2017 Best Translated Book Award and made the longlist for the 2017 National Translation Award. Her translation, the first-ever into English of Pablo Neruda’s book-length poem, venture of the infinite man, was published by City Lights Books in October of 2017. Recent translations include Edna Iturralde’s award-winning book, Green Was my Forest, published in September, 2018. Jessica has been an adjunct Spanish Professor at Santa Barbara City College, and also works as a subtitler, editor and adapter for film and television. She lives in Santa Barbara with her husband, Abe Powell, and their two children, Olivia and Leo.