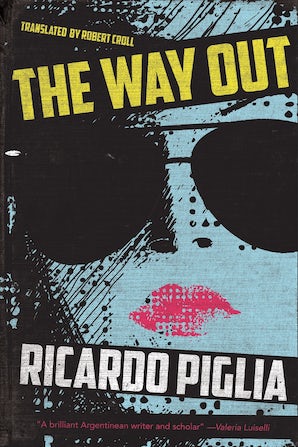 Emilio Renzi, literary alter ego of legendary Argentine author Ricardo Piglia, returns in The Way Out, an academic thriller that relentlessly questions the lengths we go to hide our own truths and to uncover the secrets of others.

In the mid 1990s Emilio Renzi leaves behind his unstable life in Argentina to take a visiting position at a prestigious university in New Jersey. Settling in for a semester of academic quietude and wintry isolation, he is surprised to be swept up in a secret romance with his colleague, the brilliant and enigmatic Ida Brown. But their clandestine relationship comes to an abrupt end when Ida is discovered in her car, killed in what appears to be a tragic accident. Discontented with the police’s lackluster inquiries, and troubled by the inexplicable burn found on her hand, Renzi begins his own investigation.

Renzi's suspicions are piqued as details emerge about a bizarre string of attacks, apparently targeting scientists and researchers. But after a radical manifesto appears in the press threatening continued violence, the killer's identity is suddenly revealed. As he delves deeper into Ida Brown’s past, Renzi discovers a link between her and the terrorist that sets him on a path of no return: he must discover once and for all whether her death was part of a larger pattern and, if so, whether she was a victim or accomplice. Renzi’s quest for truth reveals not only the secrets of his former lover, but also reveals a darker side of humanity that will force him to confront the systems and culture that could produce such a misguided killer.

A bracing critique of American culture and an exploration of privacy and politics in an era of rapid technological advancement, Piglia’s signature blend of autobiography and fiction is in full effect in this intriguing twist on the detective novel.

Robert Croll is a writer, translator, musician, and artist originally from Asheville, North Carolina. He first came to translation during his undergraduate studies at Amherst College, where he focused particularly on the short fiction of Julio Cortázar.