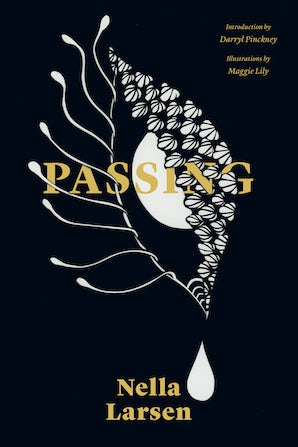 Restless Classics presents the ninetieth anniversary edition of an undersung gem of the Harlem Renaissance: Nella Larsen's Passing, a captivating and prescient exploration of identity, sexuality, self-invention, class, and race set amidst the pealing boisterousness of the Jazz Age.

When childhood friends Irene Redfield and Clare Kendry cross paths at a whites-only restaurant, it’s been decades since they last met. Married to a bigoted white man who has no idea that she is African American, Clare has fully embraced her ability to “pass” as a white woman. Irene, also light-skinned and living in Harlem, is shocked by Clare’s rejection of her heritage, though she too passes when it suits her needs. This encounter sparks an intense relationship between the two women who, as acclaimed critic and novelist Darryl Pinckney writes in his insightful introduction, reflect Larsen’s own experience of being “between black and white, and culturally at home nowhere.”

In a culture intent on setting boundaries, Clare and Irene refuse to adhere to expectations of gender, race, or class, culminating in a tragic clash of identities, as their relationship swings between emotional hostility and intense attraction.

Nella Larsen was born Nellie Walker in 1891 in Chicago. Her mother was a Danish immigrant and her father an immigrant from the Danish West Indies. Larsen attended school in all white environments in Chicago until she moved to Nashville to attend high school. Larsen later practiced nursing, and from 1922 to 1926, served as a librarian at the New York Public Library. After resigning from this position, Larsen began her literary career by writing her first novel, Quicksand (1928), which won her the Harmon Foundation’s bronze medal. After the publication of her second novel, Passing (1929), Larsen was awarded the first Guggenheim Fellowship given to an African American woman, establishing her as a premier novelist of the Harlem Renaissance. Nella Larsen died in New York in 1964.

Darryl Pinckney, a longtime contributor to The New York Review of Books, is the author of two novels, Black Deutschland and High Cotton, and two works of nonfiction, Blackballed: The Black Vote and US Democracy and Out There: Mavericks of Black Literature.

Maggie/Malachi Lily is a shapeshifting, black, nonbinary artist and moth from Philadelphia, PA. Seeking to combat our present day cravings for instant gratification and toxic individualism, they create works of art, literature, and programming that resonate spiritual light. They hope their work causes you to want to curl up in the sun and ponder, ideally with a cat.