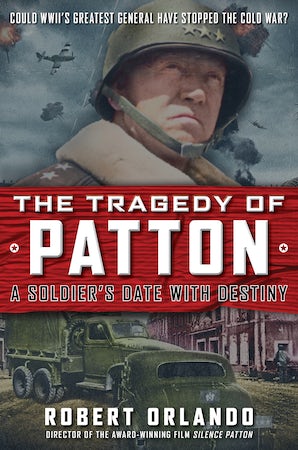 The Tragedy of Patton A Soldier's Date With Destiny

"Better to fight for something than live for nothing." — General George S. Patton

It is 75 years since the end of WW II and the strange, mysterious death of General George S. Patton, but as in life, Patton sets off a storm of controversy.

The Tragedy of Patton: A Soldier's Date With Destiny asks the question: Why was General Patton silenced during his service in World War II? Prevented from receiving needed supplies that would have ended the war nine months earlier, freed the death camps, prevented Russian invasion of the Eastern Bloc, and Stalin's murderous rampage. Why was he fired as General of the Third Army and relegated to a governorship of post-war Bavaria? Who were his enemies? Was he a threat to Eisenhower, Montgomery, and Bradley? And is it possible as some say that the General's freakish collision with an Army truck, on the day before his departure for US, was not really an accident? Or was Patton not only dismissed by his peers, but the victim of an assassin's bullet at their behest? Was his personal silence necessary?

General George S. Patton was America's antihero of the Second World War. Robert Orlando explores whether a man of such a flawed character could have been right about his claim that because the Allied troops, some within 200 miles of Berlin, or just outside Prague, were held back from capturing the capitals to let Soviet troops move in, the Cold War was inevitable. Patton said it loudly and often enough that he was relieved of command and silenced. Patton had vowed to “take the gag off” after the war and tell the intimate truth and inner workings about controversial decisions and questionable politics that had cost the lives of his men. Was General Patton volatile, bombastic, self-absorbed, reckless? Yes, but he was also politically astute and a brilliant military strategist who delivered badly needed wins.

Questions still abound about Patton’s rise and fall. The Tragedy of Patton seeks to answer them.

Robert Orlando is an award-winning writer and filmmaker, and the author of The Divine Plan: John Paull II, Ronald Reagan, The Dramatic End of the Cold War and Apostle Paul: A Polite Bribe. The founder of Nexus Media, he has been involved in the writing, directing, production, development, or release of more than a dozen film and documentary projects, including: A Polite Bribe, The Divine Plan, Moment in Time, Road to Valor, Daughter of Mercy and Thucydides Trap: China & the Coming Cold War. Sony Pictures released his most recent award-winning documentary Silence Patton: First Victim of the Cold War with the DVD released Fall 2020 for the 75th Anniversary of General George S. Patton’s strange and suspicious death and the end of World War II.