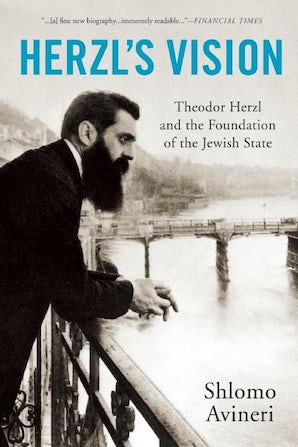 Theodor Herzl and the Foundation of the Jewish State

Theodor Herzl had been a successful Viennese journalist and a less successful playwright with no political ambitions. That changed in 1896, when he published The Jewish State. The following year he convened a Zionist Congress in Basel, Switzerland. The Congress founded the Zionist Organization in order to establish a national home for the Jewish people in Palestine, recognized and guaranteed by public international law. As Herzl transformed himself in just a few years from writer and editor into the leader of an international political movement, he learned politics and diplomacy on the run—and to great effect. In his efforts to gain broad support for his vision, Herzl met with the Ottoman sultan; the German emperor; the king of Italy; the pope; British, Russian, and German ministers; as well as a great number of other government and public opinion leaders of many European countries. By the time of his early death in 1904 at the age of forty-four, Herzl had transformed Jewish public discourse and made the idea of a Return to Zion into a reality, albeit still a weak one, in international politics.

Shlomo Avineri is a renowned Israeli political theorist and public intellectual. He is the Herbert Samuel Professor Emeritus of Political Science at The Hebrew University of Jerusalem and a member of the Israel Academy of Sciences and Humanities. He served as Director-General of Israel’s Ministry of Foreign Affairs under Prime Minister Yitzhak Rabin, headed the Israeli delegation to the UNESCO General Assembly, and is a recipient of the Israel Prize, the country’s highest civilian decoration. Avineri has had a number of visiting academic appointments including Yale University, Cornell University, Wesleyan University, the University of California, Northwestern University, and Oxford University. Avineri’s many publications include Israel and the Palestinians, The Making of Modern Zionism, and Moses Hess: Prophet of Communism and Zionism, as well as the historical introduction to the Hebrew edition of Theodor Herzl’s Diaries.

Haim Watzman has translated and edited many important Israeli books by some of the country’s leading journalists, scholars, and writers—including David Grossman, Tom Segev, and Amos Oz. He also served as Israel correspondent for The Chronicle of Higher Education and the British science journal Nature, and has written two books. Watzman grew up in America and now lives in Jerusalem.