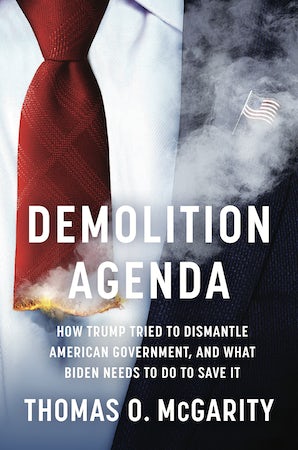 How Trump Tried to Dismantle American Government, and What Biden Needs to Do to Save It

The first comprehensive account of the Trump administration’s efforts to destroy our government institutions, by the man Ralph Nader says “writes authoritatively and with revealing detail about important topics that few others cover”

Koch Industries spent $3.1 million in the first three months of the Trump administration, largely to ensure confirmation of Scott Pruitt as head of the EPA. By July 2018, more than sixteen federal inquiries were pending into Pruitt’s mismanagement and corruption. But Pruitt was just the first in a long line of industry-friendly, incompetent, and destructive agency heads put in place by the Trump administration in its effort to dismantle the federal government’s protective edifice.

Remember Secretary of the Interior Ryan Zinke, who, before he faced eighteen separate federal inquiries and was fired, made a deal with Halliburton to build a brewery on land that Zinke owned in Montana? Or how about Transportation Secretary Elaine Chao, who rescinded requirements that high-hazard trains install special braking systems, weakened standards for storing natural gas, and lengthened the hours that truck drivers could be on the road without a break, even as she failed for two years to divest her interest in a road materials manufacturer? And then there were Rick Perry, Betsy DeVos, Sonny Perdue, Andrew Puzder . . . the list goes on.

In an original and compelling argument, Thomas McGarity shows how adding populists to the Republican’s traditional base of free market ideologues and establishment Republicans allowed Trump to come dangerously close to achieving his goal of demolishing the programs that Congress put in place over the course of many decades to protect consumers, workers, communities, children, and the environment. Finally, McGarity offers a blueprint for rebuilding the protective edifice and restoring the power of the American government to offer all Americans better lives.

Thomas O. McGarity is the William Powers Jr. and Kim L. Heilbrun Chair in Tort Law at the University of Texas at Austin School of Law and the past president of the Center for Progressive Reform. He is the author of Pollution, Politics, and Power; Freedom to Harm; The Preemption War; and Demolition Agenda: How Trump Tried to Dismantle American Government, and What Biden Needs to Do to Save It (The New Press), among other books. He lives in Austin, Texas.