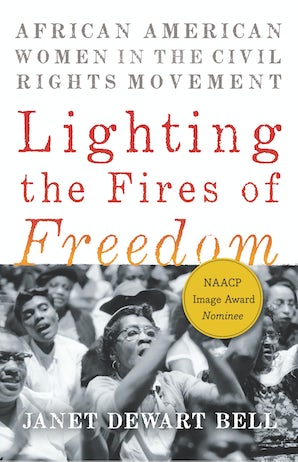 Lighting the Fires of Freedom

Recommended by The New York Times, The Washington Post, Book Riot and Autostraddle

Nominated for a 2019 NAACP Image Award, a groundbreaking collection of profiles of African American women leaders in the twentieth-century fight for civil rights

During the Civil Rights Movement, African American women did not stand on ceremony; they simply did the work that needed to be done. Yet despite their significant contributions at all levels of the movement, they remain mostly invisible to the larger public. Beyond Rosa Parks and Coretta Scott King, most Americans would be hard-pressed to name other leaders at the community, local, and national levels.

In Lighting the Fires of Freedom Janet Dewart Bell shines a light on women's all-too-often overlooked achievements in the Movement. Through wide-ranging conversations with nine women, several now in their nineties with decades of untold stories, we hear what ignited and fueled their activism, as Bell vividly captures their inspiring voices. Lighting the Fires of Freedom offers these deeply personal and intimate accounts of extraordinary struggles for justice that resulted in profound social change, stories that are vital and relevant today.

A vital document for understanding the Civil Rights Movement, Lighting the Fires of Freedom is an enduring testament to the vitality of women's leadership during one of the most dramatic periods of American history.

Janet Dewart Bell is a social justice activist with a doctorate in leadership and change from Antioch University. She founded the Derrick Bell Lecture on Race in American Society series at the New York University School of Law and is the author of Lighting the Fires of Freedom: African American Women in the Civil Rights Movement and Blackbirds Singing: Inspiring Black Women’s Speeches from the Civil War to the Twenty-First Century and the co-editor (with Vincent M. Southerland) of Carving Out a Humanity and Race, Rights, and Redemption (all published by The New Press). An award-winning television and radio producer, she lives in New York City.