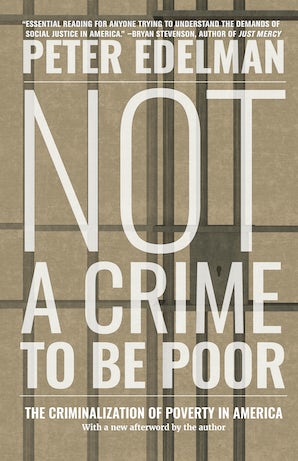 Not a Crime to Be Poor

The Criminalization of Poverty in America

"Essential reading for anyone trying to understand the demands of social justice in America."—Bryan Stevenson, author of Just Mercy

Winner of a special Robert F. Kennedy Book Award, the book that Evicted author Matthew Desmond calls "a powerful investigation into the ways the United States has addressed poverty . . . lucid and troubling"

In one of the richest countries on Earth it has effectively become a crime to be poor. For example, in Ferguson, Missouri, the U.S. Department of Justice didn't just expose racially biased policing; it also exposed exorbitant fines and fees for minor crimes that mainly hit the city's poor, African American population, resulting in jail by the thousands. As Peter Edelman explains in Not a Crime to Be Poor, in fact Ferguson is everywhere: the debtors' prisons of the twenty-first century. The anti-tax revolution that began with the Reagan era led state and local governments, starved for revenues, to squeeze ordinary people, collect fines and fees to the tune of 10 million people who now owe $50 billion.

Nor is the criminalization of poverty confined to money. Schoolchildren are sent to court for playground skirmishes that previously sent them to the principal's office. Women are evicted from their homes for calling the police too often to ask for protection from domestic violence. The homeless are arrested for sleeping in the park or urinating in public.

A former aide to Robert F. Kennedy and senior official in the Clinton administration, Peter Edelman has devoted his life to understanding the causes of poverty. As Harvard Law professor Randall Kennedy has said, "No one has been more committed to struggles against impoverishment and its cruel consequences than Peter Edelman." And former New York Times columnist Bob Herbert writes, "If there is one essential book on the great tragedy of poverty and inequality in America, this is it."

Peter Edelman is the Carmack Waterhouse Professor of Law and Public Policy and the faculty director of the Center on Poverty and Inequality at Georgetown University Law Center. He is the author of So Rich, So Poor: Why It's So Hard to End Poverty in America (The New Press). A top advisor to Senator Robert F. Kennedy from 1964 to 1968, he went on to fill various roles in President Bill Clinton's administration, from which he famously resigned in protest after Clinton signed the 1996 welfare reform legislation. He lives in Washington, DC.