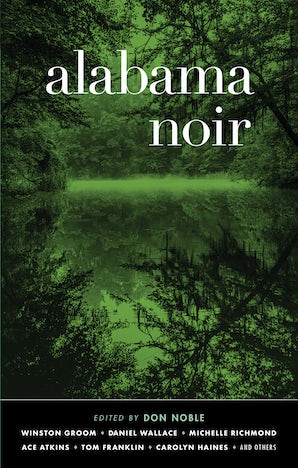 "A beautifully engineered anthology of 16 crime and mystery stories that are heavy on setting, atmosphere, and human emotion."
--Mystery Scene

"Each story springs from a particular place, actual streets, honkytonks or stomping grounds any Alabamian may have walked."
--Tuscaloosa News

One of Alabama.com's 10 recent books with Alabama ties you'll want to read

"Alabama Noir is known for its fertile deep-south perspective and encounters troubles and foibles galore as well as darkness in many forms."
--Birmingham Times

"Short fiction is alive and well in Alabama...There is not a single story unworthy of this collection infused with Alabama settings, and all readers will find tasty literary morsels to their liking."
--Alabama Writers' Forum

"If the darkness suits you, there's a new anthology to suit your shadowy heart...[Alabama Noir] holds 16 tales packed with sinister ambition, iniquity, revenge and the prices we pay for our schemes."
--Lagniappe Weekly

"Alabama Noir presents a group of stories diverse in their approach, their subject matter, their sub-genre, their influences, and their political perspective, and it can be fascinating to see how those varied influences intersect."
--Another Chicago Magazine

"Banish any boredom with a descent into Alabama Noir."
--Southern Review of Books

"The 16 tales in this entertaining Akashic noir anthology cover the entire state of Alabama...The flaws are few and far between, and as is so often the case for the series, each contributor consistently embraces the setting."
--Publishers Weekly

Akashic Books continues its award-winning series of original noir anthologies, launched in 2004 with Brooklyn Noir. Each book comprises all new stories, each one set in a distinct location within the geographic area of the book.

From the introduction by Don Noble:

Some locales seem to come with their own soundtrack. Don Ho and his tiny bubbles provide the background music for Hawaii, Edith Piaf for Paris. The reggae of Bob Marley evokes Jamaica. The soundtrack for Alabama is without question provided by our troubled troubadour Hank Williams. The 2016 biography Hank by Mark Ribowsky paints a dark picture of the musician's short, alcoholic, drug-filled life: a life of loneliness and pain. He goes so far as to call Hank's life story "noir-ish"...

In Alabama Noir we encounter "troubles and foibles" galore, darkness in many forms. The stories range from the deadly grim to some that are actually mildly humorous. We see desperate behavior on the banks of the Tennessee River, in the neighborhoods of Birmingham, in the affluent suburbs of Mobile, in a cemetery in Montgomery, and even on the deceptively pleasant beaches of the Gulf of Mexico.

Fans of noir should all find something to enjoy.

DON NOBLE is the editor of twelve volumes, three of which are collections of short fiction by Alabamians. He has received a regional Emmy Award for achievement in screenwriting and is the recipient of the state prizes for literary scholarship and service to the humanities, as well as the Governor's Arts Award. Noble is host of the TV literary interview show Bookmark with Don Noble and reviews books weekly for public radio.