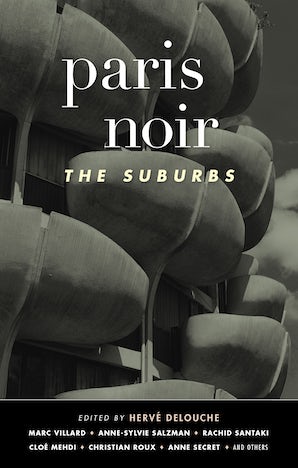 Following the success of Paris Noir, the Akashic Noir Series has expanded to include the famously diverse and sometimes controversial suburbs of this legendary city.

"A treasure chest of resources for any noir author seeking a more gruesome approach or a more relentless destruction of the soul. One might hope the real Paris suburbs are not so dark and blood drenched. But by the end of the collection, that hope seems almost foolish, and the body found on the quay seems to be the lucky guy in the story."
—New York Journal of Books

"The short stories center on the suburbs of Paris, fertile soil for all sorts of resentment and violence. . . .For lovers of crime noir short fiction, these are 12 stories of life lived in the raw."
—Library Journal

"Paris’s suburbs—a mix of slums, posh neighborhoods, fading industrial centers, and the city’s notorious housing projects that lie out of the sight of most tourists—provide the setting for [these] 13 tales."
—Publishers Weekly

From the introduction by Hervé Delouche:

The term Greater Paris is in vogue today, for it has an administrative cachet and seems to denote a simple extension of the capital—as if a ravenous Paris need only extend her web. However, it was not our goal to embrace the tenets of the metro area’s comprehensive plan, aka the Grand Projet, envisioned as a future El Dorado by the planners and developers. Rather, our aim was to depict the Parisian suburbs in all their plurality and diversity. Without pretending to encompass every spot on the map, we instead opted to give voice and exposure to the localities chosen by the writers who have been part of this adventure. Thus, we decided to adopt the word “suburbs”— in the plural, obviously, for the periphery of the capital is not a homogeneous bloc, nor is it reducible to a cliché like “the suburban ring” . . . Here are thirteen stories, decidedly noir, to be savored without sugar or sweetener.

Hervé Delouche is a noir literature specialist, columnist, conference moderator, and noir festival coordinator. He was in charge of the full reissue of Jean Meckert’s work for Éditions Joëlle Losfeld, and he works as a copy editor for the French publishers Gallmeister, Rivages, and le Seuil. From 2007 to 2016 he was the president of 813, the first French association of noir literature lovers.