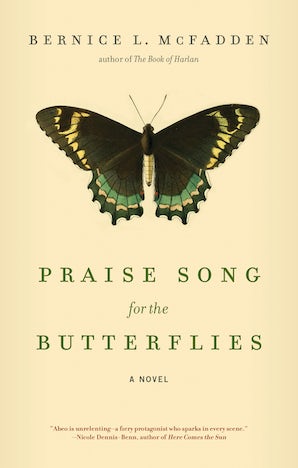 Praise Song for the Butterflies

Longlisted for the 2019 Women's Prize for Fiction

"McFadden, writer of great, imaginative novels for years now (including Sugar and Gathering of Waters), is back with one of her best yet. Exploring ritual sacrifice in contemporary West Africa, Praise Song offers a fascinating, painful glimpse into a world beyond America's shores, filled with tragedy and love and hope."
--Entertainment Weekly

"Perhaps one of the best books of the year, Praise Song for the Butterflies is a stunning, brief portrait that humanizes the plight of those in ritual servitude. It's a fantastic work from a gifted author."
--The Gazette

"A fictional West African country is the setting for Bernice L. McFadden's latest work, Praise Song for the Butterflies. Here we meet Abeo Kata, a 9-year-old girl who is ripped from her privileged lifestyle when her father forces her to become a slave in a religious sect. Rescued after 15 years, Abeo struggles to overcome dark family secrets while learning to love again."
--Essence Magazine

"Bernice L. McFadden's novel Praise Song for the Butterflies has received great reviews and will be published today. The book centers on Abeo Kata, the privileged daughter of a government employee and a stay-at-home mother in West Africa whose happy life changes dramatically after she's placed in a shrine as an offering. Fifteen years later, Abeo is finally rescued and must learn to move beyond her traumatic past."
--Good Morning America

"The novel has a timeless quality; McFadden is a master of taking you to another time and place. In doing so, she raises questions surrounding the nature of memory, what we allow to thrive, and what we determine to execute...McFadden brings the sweeping drama of her earlier works--The Book of Harlan, Glorious, Gathering of Waters--into this small book, and reminds me of the gentle fierceness of Edwidge Danticat's writing."
--Los Angeles Review of Books

"Praise Song for the Butterflies is written like a fable--one of devastation, but triumph, too. Bernice L. McFadden's novel sheds light on the long practice of trokosi, ritual servitude to priests."
--Refinery29

Abeo Kata lives a comfortable, happy life in West Africa as the privileged nine-year-old daughter of a government employee and stay-at-home mother. But when the Katas' idyllic lifestyle takes a turn for the worse, Abeo's father, following his mother's advice, places the girl in a religious shrine, hoping that the sacrifice of his daughter will serve as atonement for the crimes of his ancestors. Unspeakable acts befall Abeo for the fifteen years she is held in the shrine. When she is finally rescued, broken and battered, she must struggle to overcome her past, endure the revelation of family secrets, and learn to trust and love again.

In the tradition of Chris Cleave's Little Bee, this novel is a contemporary story that offers an eye-opening account of the practice of ritual servitude in West Africa. Spanning decades and two continents, Praise Song for the Butterflies will break your heart and then heal it.

Bernice L. McFadden is the author of nine critically acclaimed novels including Sugar, Loving Donovan, Nowhere Is a Place, The Warmest December, Gathering of Waters (a New York Times Editors' Choice and one of the 100 Notable Books of 2012), Glorious, and The Book of Harlan (winner of a 2017 American Book Award and the NAACP Image Award for Outstanding Literary Work, Fiction). She is a four-time Hurston/Wright Legacy Award finalist, as well as the recipient of three awards from the BCALA.