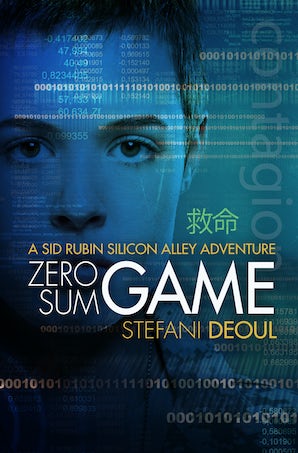 Zero Sum Game finds our high-flying lesbionic brainiac Sid Rubin and her unlikely posse of friends grounded, with wings clipped from their live-action-role playing misadventures. To break out of parental jail, Sid, Jimmy, Imani, Ari and Vikram enter a school robotics competition. But just as things get interesting, Vik learns that his super-star status and hard-won trophies from the frantic online game Contagion have been stolen. "Faut pas toucher mes amis. You do not mess with my friends." Watching Vik fall apart, Sid is determined to track down the trophy thief, no matter how much late-night gaming and sleuthing it takes. Sid and the gang join newcomer Ze to chase ghosts and trawl dungeons in a frenzied race against time to not just save Vik's bevy of stolen gaming goods, but also the life of a teenage gamer held hostage.

STEFANI DEOUL is the author of three award-winning novel. She has written for numerous publications, including Curve Magazine, Outdoor Delaware and Letters from CAMP Rehoboth, penned short stories, and written both film and television treatments. As a television producer her resume includes TV series such as Haven for the SyFy Network, The Dead Zone, Brave New Girl, Dresden Files and Missing.