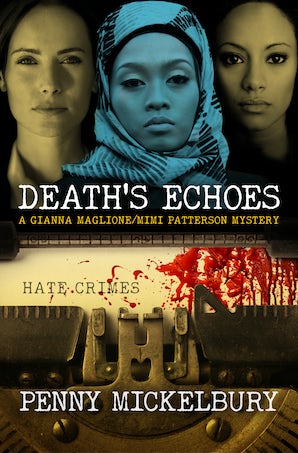 Police Lieutenant Gianna Maglione heads up the DC Police Department’s Hate Crimes Unit. She investigates those who espouse and perpetrate acts of hatred. She hunts them down and infiltrates their habitats, and then she finds out where they live and work and who their friends are. She learns what their next evil acts are likely to be, and who will be their victims. Then, she must stop the violence—because hatred is almost always violent. But what happens to a cop when one of her officers becomes the victim of a brutal hate crime, and her girlfriend is targeted for a hit? Mimi Patterson is the lead investigative reporter for Washington DC’s top newspaper. She’s not the kind of reporter who skims the surface of any story—she digs deep, asks the hard questions, leaves no stone unturned. She’s looking for facts, for all of them, seeking out the truth. There’s nothing fake about the news she reports, and the truth that she uncovers comes at a terrible price. But what happens when she finds herself unable—or perhaps unwilling—to pursue the big stories that come her way, to follow them wherever they lead? The evils of racism, sexism, homophobia, misogyny, and religious intolerance pervade every aspect of our modern society. Hatred is a powerful force, one whose goal is to maim, weaken, diminish, and destroy. After so many years and so much hatred, Mimi and Gianna must finally come to terms with the price paid for their personal commitments to their jobs and to each other. And this time, the violence hits close to home, and the voices of its victims live on in the minds and consciences of Mimi and Gianna. They speak to them—and they remind them never to forget that they were denied life, liberty, and the pursuit of happiness simply because of who they were.

PENNY MICKELBURY is the author of three successful mystery series and an award-winning playwright. She is a two-time Lambda Literary Award finalist, was a writer in residence at Hedgebrook Women Writers Retreat, and is a recipient of the Audre Lorde Estate Grant. In 2001 she was awarded the Gold Pen Award for Best Mystery/Thriller from the Black Writers Alliance, and the Prix du Roman d’Adventures from Les Éditions du Masque. In 2017, she was commissioned by the Jo Howarth Noonan Foundation for the Performing Arts to write a ten-minute play in celebration of “women of a certain age”. Prior to focusing on literary pursuits, Penny was a pioneering newspaper, radio and television reporter, based primarily in Washington, D.C., wrote journalistic non-fiction, and was a frequent contributor to such publications as Black Issues Book Review, Africana.com, and the Washington Blade.