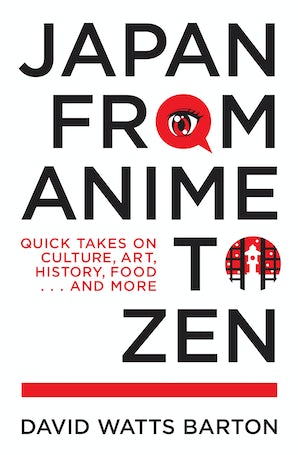 Japan from Anime to Zen

This friendly guide offers concise but detailed demystifications of more than 85 aspects of ancient and modern Japan. It can be read in sequence, or just dipped into, depending on the moment’s need. Explanations go much deeper than a typical travel guide and cover 1,500 years of history and culture, everything from geisha to gangsters, haiku to karaoke, the sun goddess to the shogunate . . . and anime to Zen.

David Watts Barton is an award-winning freelance journalist who has covered popular music, culture, travel and outdoor recreation for 40 years for newspapers, magazines, radio and online. His former employers include The Sacramento Bee, Bloomberg, and NPR. For the last five years he has worked exclusively in Japan.

He was writer/editor of Japanology.org and has written freelance for Japanese clients that include architectural firms, art galleries, hotels and branding companies.

In addition to awards including the first Arts Journalist of the Year, given by the Sacramento Arts and Business Council in 2011, Barton has been a fellow at UC Berkeley's Knight Digital Media Center and at the University of Southern California’s Annenberg School for Communication and Journalism.