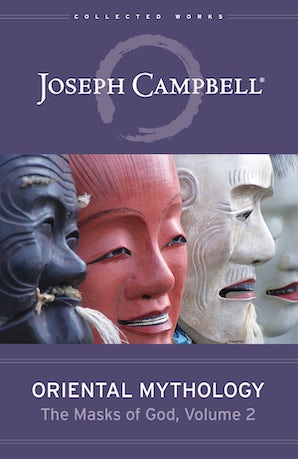 The second volume in Joseph Campbell’s monumental four-volume Masks of God series explores Asian mythology and its evolution into the distinctive religions of Egypt, India, China, and Japan. This Collected Works of Joseph Campbell edition has been revised with up-to-date science and new illustrations.

In this legendary exploration of Asian mythology, Joseph Campbell delves into the underlying myths and folkloric traditions that evolved into the great philosophies of the Egyptians and Sumerians, as well as the distinctive religions of India, China, and Japan, including Hinduism, Buddhism, Taoism, and Shintoism.

Oriental Mythology was originally published in 1962 as the second volume of Campbell’s monumental four-volume series The Masks of God. On completing the series, Campbell wrote, “Its main result for me has been the confirmation of a thought I have long and faithfully entertained: of the unity of man, not only in its biology, but also in its spiritual history, which has everywhere unfolded in the manner of a single symphony . . . irresistibly advancing to some kind of mighty climax, out of which the next great movement will emerge.”

Oriental Mythology remains mesmerizing in its eloquence, its scope, and its tantalizing vision of what may next emerge. This new hardcover edition, which joins The Collected Works of Joseph Campbell, features up-to-date archaeological, anthropological, and psychological information, as well as forty new or improved illustrations.

Joseph Campbell was an American author and teacher best known for his work in the field of comparative mythology. He was born in New York City in 1904, and from early childhood loved to read about American Indians and frequently visited the American Museum of Natural History, where he became captivated by the museum’s collection of totem poles. From those days onward, Campbell’s interest in mythology grew and deepened. He was educated at Columbia University, where he specialized in medieval literature, and, after earning a master’s degree, continued his studies at universities in Paris and Munich.

Throughout his life, he traveled extensively and wrote prolifically, authoring many books, including the classic The Hero with a Thousand Faces, the four-volume series The Masks of God, Myths to Live By, The Inner Reaches of Outer Space, and the Historical Atlas of World Mythology. Campbell died in 1987. In 1988, a series of television interviews, Joseph Campbell and the Power of Myth with Bill Moyers, introduced his views to millions of people.