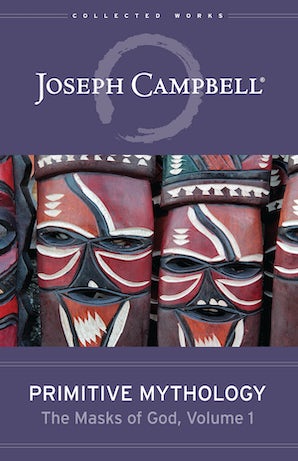 The first volume in Joseph Campbell’s monumental four-volume Masks of God series, originally published in 1959 and now revised with up-to-date science and new illustrations in this Collected Works of Joseph Campbell edition

In this first volume of The Masks of God, the world’s preeminent mythologist explores and illuminates the wellsprings of myth. Showing his exemplary combination of scholarly depth and popular enthusiasm, Joseph Campbell looks at the expressions of religious awe in early humans and their echoes in the rites of surviving primal tribes. Campbell shows how myth has informed our understanding of the world, seen and unseen, throughout time. As he explores and shares archetypal mythic images and practices, he also points to how these concepts inform our personal lives.

Upon completing the monumental Masks of God series, Campbell found that his work affirmed “the unity of the race of man, not only in its biology, but also in its spiritual history.” He likened this unity to a symphony in which various parts create a “great movement.” Perhaps more than ever before, Campbell’s insight is not only illuminating but also inspiring.

Joseph Campbell was an American author and teacher best known for his work in the field of comparative mythology. He was born in New York City in 1904, and from early childhood loved to read about American Indians and frequently visited the American Museum of Natural History, where he became captivated by the museum’s collection of totem poles. From those days onward, Campbell’s interest in mythology grew and deepened. He was educated at Columbia University, where he specialized in medieval literature, and, after earning a master’s degree, continued his studies at universities in Paris and Munich.

Throughout his life, he traveled extensively and wrote prolifically, authoring many books, including the classic The Hero with a Thousand Faces, the four-volume series The Masks of God, Myths to Live By, The Inner Reaches of Outer Space, and the Historical Atlas of World Mythology. Campbell died in 1987. In 1988, a series of television interviews, Joseph Campbell and the Power of Myth with Bill Moyers, introduced his views to millions of people.