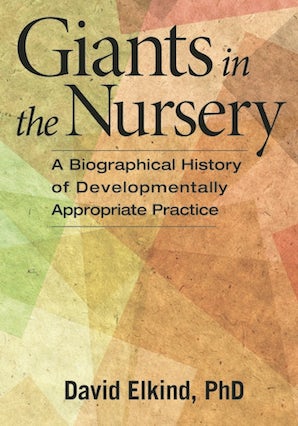 Giants in the Nursery

Examine the evolution of developmentally appropriate practice with this biographical history of early childhood education. This book explores the theory's progression—from its beginnings in writings of sixteenth- and seventeenth-century philosophers, its experimental implementation by eighteenth- and nineteenth-century practitioners, and its scientific grounding in contemporary theory and research—and includes biographical sketches and perspectives of eleven philosophical, pedagogical, and theoretical figures—the giants—in this evolution.

David Elkind, PhD, is the best-selling author of more than twenty books and a well-known early childhood expert who has appeared on shows including Today Show, CBS Morning News, 20/20, Dateline, Donahue, and Oprah.

David Elkind: David Elkind is professor emeritus of child development at Tufts University in Medford, Massachusetts. He was formerly professor of psychology, psychiatry, and education at the University of Rochester. Professor Elkind obtained his doctorate at UCLA and then spent a year as David Rapaport's research assistant at the Austen Riggs Center in Stockbridge, Massachusetts. From 1964-65 he was a National Science Foundation Senior Postdoctoral Fellow at Piaget's Institut d' Epistemologie Genetique in Geneva. His research has been in the areas of perceptual, cognitive, and social development where he has attempted to build upon the research and theory of Jean Piaget.

Professor Elkind's bibliography now numbers over five hundred items and includes research, theoretical articles, book chapters, and twenty-two books. He has also appeared on the Today Show, CBS Morning News, 20/20, Dateline, Donahue, and the Oprah Winfrey Show. He's been profiled in People and Boston magazines, was contributing editor for Parents magazine, and co-hosted the Lifetime Television series Kids These Days. He is past president for the National Association for the Education of Young Children (NAEYC), a member of many professional organizations, a consultant to state education departments and government agencies, and lectures extensively across the United States, Canada, and abroad. He is also the scientific adviser to Marco Polo Learning, Inc., an education app company.