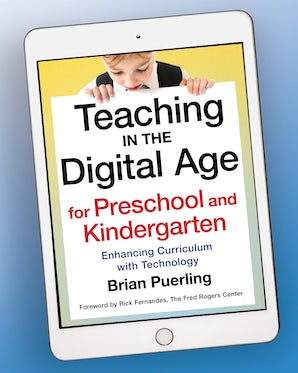 Teaching in the Digital Age for Preschool and Kindergarten

Across the curriculum, Teaching in the Digital Age for Preschool and Kindergarten will guide teachers toward integrating technology so it has an authentic, meaningful, and developmentally appropriate impact on children’s exploration and learning. By discipline---including science, math, literacy, art, social studies, health and safety, physical education, and music---it will motivate teachers to dig deeper into each content area to see the various ways technology and digital media can support and strengthen children's learning, as well as documentation and assessment.

As Executive Director of the Fred Rogers Center, Rick Fernandes is responsible for strategic partnerships, program development, and outreach and communications. He has been involved in children’s television for 30 years where he has worked on shows including Blue’s Room, Between the Lions, Out of the Box, Bear in the Big Blue House, and Reading Rainbow. Rick’s achievements include 11 Emmy nominations covering five different children’s series for PBS, Disney Channel and Nickelodeon, and one Emmy win for directing Disney Channel’s Bear in the Big Blue House. He also has experience in general entertainment, working on sitcoms, reality, game shows and music videos. Previously, Rick served as Executive Director, General Entertainment Content in Southeast Asia for Turner International Asia Pacific Limited.