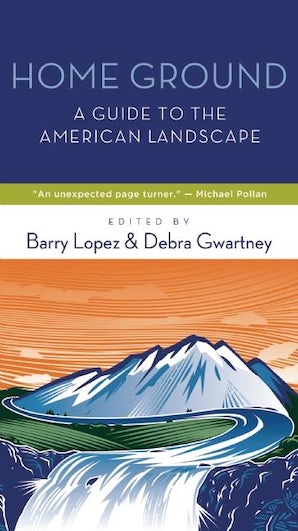 A Guide to the American Landscape

Hailed by book reviewers as a "masterpiece," "gorgeous and fascinating," and "sheer pleasure," Home Ground: A Guide to the American Landscape was published in fall 2006 in hardcover. It was met with outstanding reviews and strong sales, going into three printings. A language-lover's dream, this visionary reference revitalized a descriptive language for the American landscape by combining geography, literature, and folklore in one volume. This is a totally redesigned, near-pocket-sized field guide edition of the best-selling hardcover.

Home Ground brings together 45 poets and writers to create more than 850 original definitions for words that describe our lands and waters. The writers draw from careful research and their own distinctive stylistic, personal, and regional diversity to portray in bright, precise prose the striking complexity of the landscapes we inhabit. Includes an introductory essay by Barry Lopez. At the heart of the book is a community of writers in service to their country, emphasizing a language suggesting the vastness and mystery that lie beyond our everyday words.

Barry Lopez is an essayist, author, and short-story writer and has traveled extensively in both remote and populated parts of the world. He is the author of Arctic Dreams, for which he received the National Book Award; Of Wolves and Men, a National Book Award finalist for which he received the John Burroughs and Christopher medals; and eight works of fiction, including Light Action in the Caribbean, Field Notes, and Resistance. His essays are collected in two books, Crossing Open Ground and About This Life. He contributes regularly to Granta, the Georgia Review, Orion, Outside, the Paris Review, Manoa, and other publications. His work has appeared in dozens of anthologies, including Best American Essays, Best Spiritual Writing, and the “best” collections from National Geographic, Outside, the Georgia Review, the Paris Review, and other periodicals. Lopez lives in western Oregon.