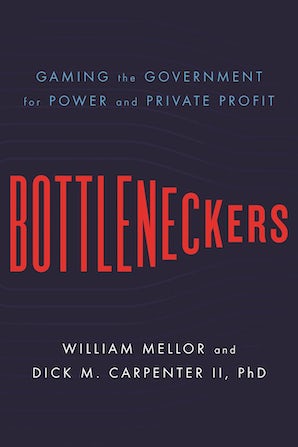 Gaming the Government for Power and Private Profit

Bottlenecker (n): a person who advocates for the creation or perpetuation of government regulation, particularly an occupational license, to restrict entry into his or her occupation, thereby accruing an economic advantage without providing a benefit to consumers.

The Left, Right, and Center all hate them: powerful special interests that use government power for their own private benefit. In an era when the Left hates fat cats” and the Right despises crony capitalists,” now there is an artful and memorable one-word pejorative they can both get behind: bottleneckers.

A bottlenecker” is anyone who uses government power to limit competition and thereby reap monopoly profits and other benefits. Bottleneckers work with politicians to constrict competition, entrepreneurial innovation, and opportunity. They thereby limit consumer choice; drive up consumer prices; and they support politicians who willingly overstep the constitutional limits of their powers to create, maintain, and expand these anticompetitive bottlenecks.

The Institute for Justice’s new book Bottleneckers coins a new word in the American lexicon, and provides a rich history and well-researched examples of bottleneckers in one occupation after anotherfrom alcohol distributors to taxicab cartelspointing the way to positive reforms.

William H. (Chip) Mellor serves as chairman and founding general counsel of the Institute for Justice. He cofounded IJ in 1991 and served as president and general counsel until 2015. He has litigated cutting-edge constitutional cases, notably achieving the first federal appellate court victory for economic liberty under the Fourteenth Amendment since the New Deal. While Mellor was president, IJ litigated five US Supreme Court cases, winning four.

Under Mellor’s leadership, IJ has grown from a five-person start-up into a law firm with a nearly hundred-member staff, including over forty attorneys and an annual budget of $20 million.

Dick Carpenter is a director of strategic research at the Institute for Justice and a professor at the University of Colorado Colorado Springs.