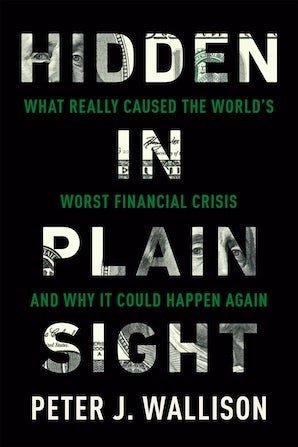 A competing narrative about what caused the financial crisis has received little attention. This view, which is accepted by almost all Republicans in Congress and most conservatives, contends that the crisis was caused by government housing policies. This book extensively documents this view. For example, it shows that in June 2008, before the crisis, 58 percent of all US mortgages were subprime or other low-quality mortgages. Of these, 76 percent were on the books of government agencies such as Fannie Mae and Freddie Mac. When these mortgages defaulted in 2007 and 2008, they drove down housing prices and weakened banks and other mortgage holders, causing the crisis.

After this book is published, no one will be able to claim that the financial crisis was caused by insufficient regulation, or defend Dodd-Frank, without coming to terms with the data this book contains.

Peter J. Wallison holds the Arthur F. Burns Chair in Financial Policy Studies and is codirector of the American Enterprise Institute’s program on Financial Policy Studies. From June 1981 to January 1985, he was General Counsel of the United States Treasury Department, where he had a significant role in developing the Reagan administration proposals for deregulating financial services. During 1986 and 1987, Wallison was White House counsel to President Ronald Reagan.

He testifies frequently before congressional committees and is a frequent contributor to the op-ed pages of the Wall Street Journal and other publications. He has also been a speaker at many conferences on financial services, housing, the financial crisis, the Dodd-Frank Act, accounting, and corporate governance and was a member of the congressionally authorized Financial Crisis Inquiry Commission (2009–2011). In 2011, Wallison received an honorary doctorate in Humane Letters from the University of Colorado.